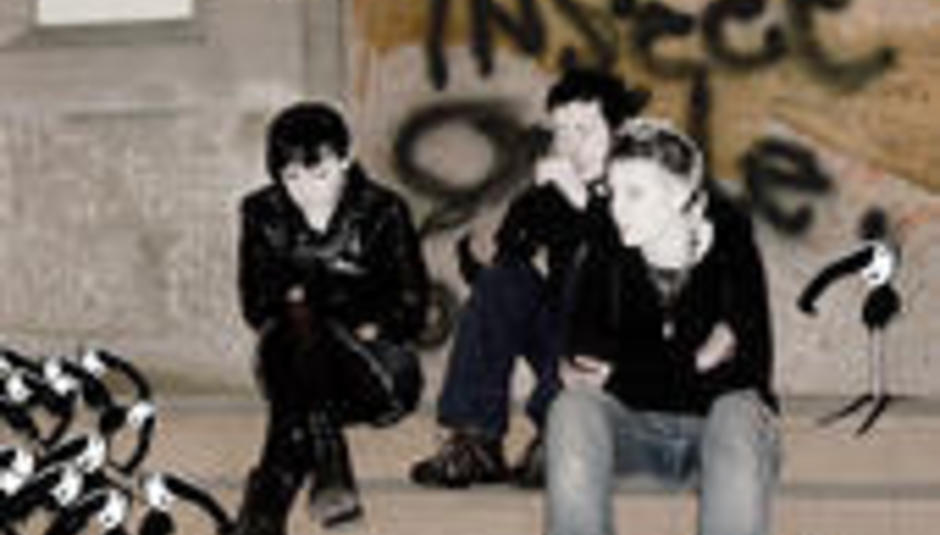 Leeds-based label 48 Crash is known for being a maverick outlet amongst more straight-and-narrow companies - none of the artists on their roster are exactly sheep-like followers of what’s in vogue at the minute. If anything, they’ve been creating their own scene without a name, as the likes of Black Wire, The Ivories (albeit briefly) and Last Gang – all different by nature but great in their own right – have proved.

Their latest signings The Insect Guide, however, are a different proposition entirely. Outsiders and proud of it, they may only be just over a year (and five gigs) old, but already their ethereal, post-rock-part-shoegaze noise is creating massive waves of interest in their adopted home city. Soon, we guarantee, it will be doing the same in your town.

Comprising six members in total – Su Sutton (vocals), Stan Howells (vocals/guitars), Belinda Schofield (guitar), Gareth!!!(?) (bass), Joy Gilleard (drums), and Dan Merrick (keyboards/samples) – but initially based around the duo of Sutton and Howells, The Insect Guide are gearing up for their first release in February of next year: a double CD/DVD featuring nine songs and nine accompanying videos. Audacious? Perhaps. Ambitious? Definitely, but as singer/songwriter Su Sutton explains to DiS, they wouldn’t have it any other way.

“At this moment in time we couldn’t imagine the songs without the films. It’s an integral part of the live show and something we want to replicate where possible on our record releases.”

Born from a collaboration between Sutton and Howells – the whole process, from the music to the lyrics and beyond, is an entirely joint effort – the films are just another intriguing side to The Insect Guide, one that makes them a mouth-watering prospect.

“Stan makes films all the time, anyway. He uses several aliases – Noel Bones and No Bones among others – and he’s got this studio in his attic where he locks himself away for days. Then, all of a sudden, I’ll get a phone call to get myself round in half an hour and a new idea comes to life,” declares Su, enthusiastically.

“We’ve been writing together for two years now, and when we first laid the tracks down, Stan was also recording with a band called Time For Rodeo which Choque (Hosein – ex-Black Star Liner and 48 Crash Records engineer) - was producing, and when he heard our tracks he immediately decided he wanted to work with us and get us on the label. The next thing for us to do was to try and get a band together to replicate the sound for a live environment.”

Any notions that The Insect Guide have been put together for any other purpose are quickly dispelled by Su, particularly when she describes her first meeting with Stan Howells.

“I moved to Leeds when I was 21 – two years ago – and I was just putting an advert on the wall in Jumbo Records when I noticed one alongside it, which matched mine in terms of influences and ideas. I gave this guy a call – who happened to be Stan – and we hit it off immediately and started writing together. I brought Joy (Gilleard, drums) in first as I’d known her since I was about 10 or 11 and we’d played in bands before, while other band members just came and went on a regular basis until we settled on the current line-up, such as bringing in a second guitarist which takes our studio sound that little bit further, as one wasn't enough.”

Su is quite passionate about the time her and Stan spend in the studio, but admits that playing live is where the band get most of their energy and enthusiasm from.

“There’s nothing like being on stage in front of people, particularly when they’re not really expecting what we do. It’s very intense, and we all wear dark clothing so the film projections are actually displayed upon each band member as well as the screen at the back. It feels like being lost in a world of our own for half an hour!” says the diminutive singer, somewhat overwhelmed.

So with the Leeds scene being as it were, divided between Kaiser Chiefs-influenced foppish ladrock and Dance To The Radio’s avant-garde post-punk racket, where do The Insect Guide see themselves in the context of the local music revelry?

“We don’t!” says Su, perhaps with an air of caution. “We’re not trying to do or be anything, as such. We’re happy being this anomaly that stands out from the crowd, yet feels in touch with its audience at the same time. I mean, we’ve always kept quite a low profile as far as the scene goes – that’s probably why we’ve only played five gigs as The Insect Guide to date – but equally we’re quite prolific, as we’ve already got most of the songs laid down for the second album. We’ve put too much effort and commitment into what we’re doing to worry about whether we’re part of a scene anyhow.”

The Insect Guide’s CD/DVD album is expected to be out in February 2007, and may be preceded by an as-yet undecided limited edition seven-inch and download single. They are also gonna be playing the Nottingham DiS night at Junktion 7, on January 13 next year.

To add yourself to this gig using the DiS Gig Calendar, here