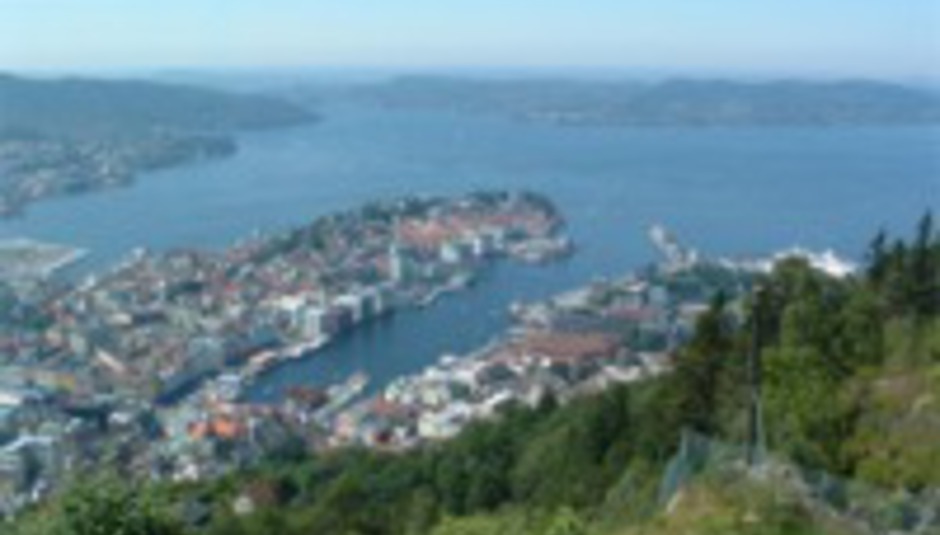 Raz on The Raz in... Norway

Raz on The Raz in... Norway

My 2006 World Tour (primarily via Scandinavia and Donington Racetrack) came to an brief and unexpected stop in Norway earlier this year. More precisely, I was told that I would be in Bergen, the country’s second largest city, for a meagre 23 hours. The mission? To see some sort of televised roadshow and meet some cool people. The possible logistical difficulties worried me the most as I had less than a day in a city of only a quarter of a million people. I comforted myself with the reassuring thought that black metal legends Satyricon were from this very town. It couldn’t be that bad.

After a teasing two-hour stop in Oslo, where I walked an massive 150 yards out of the airport before realising it was actually a very long way to the city so I was better off sitting down with a beer and a sandwich, I finally touched down in Bergen Airport and was amazed at how lovely the weather was. I was soon informed that it rains, snows or just generally attracts shit weather 75 per cent of the time in Bergen and that I was extremely lucky. The cab drivers are very nice. It wasn’t the last I’d see of them.

It took just 15 minutes to get to the town centre, where my hotel was, and after dumping my bags in my room I was straight out into the field. I made a mental note to myself on they way out, however, that I would not miss breakfast. Not this time. Norway was uncharted territory for me and after noticing there was a Grieg performance in the courtyard of my hotel, the stroll down to the town square, where the gig was being held, saw a statue of the famous composer as well. Edvard Grieg was apparently a Bergen native as well. Could this city be rivalling our own fair Manchester for musical luminaries? Yeah. Maybe.

Anyway, having tottered down through the square towards the stage to find out more about this event I bumped into Pet Shop Boys-esque electro-rockers Lorraine and started yelling at their massive singer, Ole Gundarsen. Living in Camden Town at the moment, they’re regulars down London’s Crobar when they’re not touring excessively but it turns out that the trio is actually from Bergen and are playing a song at the gig. What a coincidence.

It turns out that the gig was a mix between Top Of The Pops and the Radio 1 Roadshow as it featured open-air performances of the top singles in Norway in a different city every week! Incredible! After being treated to some pioneering Norwegian hip-hop, a pretty standard girl-boy pop band and the gayer-than-The-Darkness cock rock of the magnificent Eurovision 2005 contestants, Wig Wam as well as Lorraine singing their fantastic recent single, ‘I Feel It’, I was whisked off by the band, past the fishy-smelling harbour to go to the top of that hill.

It was while I was standing on that summit that the tour of Bergen began. ?le and elfin guitarist Anders Winsents began by pointing out where they used to live, identifying their houses with ease and frantically pointed fingers. Obviously it took little time before they started showing me where the best places for a dance and a shandy were. Apparently, Bergen lays claim to having the oldest rock club in Northern Europe. I think this is mainly because it is situated in a cave but I’m not going to take on the tourist board over this one. Not this year. Not far from it is the Garage Rock Bar which has apparently hosted many a good party over the years and is a strong early contender for wasting the night getting wasted in.

From the highest point in Bergen, keyboardist Paal Haaland explained how it was at this port that the Black Death crossed over to Norway from London in 1349. This event provided direct inspiration for the name of the fantastic black metallers featuring Frost, who drums in Satyricon. It was at this point that we discussed how Lorraine recorded their demos in the same studio as Satyricon. That was funny, but not as funny as finding out that DiS Records’ Swedish post-rock phenomenon, Jeniferever share a soundman with black metallers and fellow countrymen, Dark Funeral. It’s all about that shit!

That altitude sure did help to work up an appetite and so what else to do but sample some fine Norwegian cuisine. To the curry house! Over a quite wonderful chicken tikka masala we discussed the difficulties and wonders of living in London. After signing to Columbia late last year, the band decided to decamp to the UK as it would serve as a base for them while they continue their extensive touring schedule, it also meant that it was over six months since they had seen their family and friends and so, after the last bit of fine chickeny sauce was mopped up by the last bit of floury naan bread the three said their goodbyes. For now…

I’d gotten wind of some sort of party linked to the gig in a bar, somewhere in Bergen. Obviously I had to find it, there was probably some free shit. True to form, while the shock of paying the equivalent of £7 for a pint of Hansa lager beer had been tempered somewhat by the acquired knowledge that it had been “Norway’s finest beer since 1891” and that it was also brewed locally, an unlimited supply of an absolutely free version of the same beer proved to be very, very appealing. After my first sip, which would have cost approximately 50 pence, I bumped into flamboyant Wig Wam singer Glam, AKA Åge Sten Nilsen.

The lack of cost withstanding, the beer tasted not so good and was rapidly weakening my will to live and so it was off to explore the city once more, despite the large number of hot women that had just arrived. I remembered that Lorraine said they were going to meet some friends in a pub called Biskopen. Bearing in mind the very small nature of this city, it is a wonder how long I took to find this pub. It was those taxi drivers leading me onto a wild goose chase. Maybe they don’t have to have The Knowledge in Norway but their directions were mind-bogglingly confusing, even when drawn on a very big map. It was nothing to do with all the free beer. Nothing at all.

Once in the Biskopen there was a warm and friendly atmosphere and the bar prices weren’t as killer as they could’ve been and the short but time-consuming journey across the city was not in vain as Lorraine were indeed in the bar. Friends, siblings and colleagues were all duly introduced and much booze was consumed. Ultimately, the draw of free shit and hot women will always prove too strong, regardless of the quality on offer, and the band was eventually gently coaxed into returning with me to the bar with all the free beer and hot women.

After taking a seat in a corner, I was rudely interrupted by some raucous celebrations to my left. It turns out that a couple of Norwegian Pop Idol contestants were in the house. Having played a song at the gig earlier, the couple (Håkon Njøten and Sofie Storaas) were on fire. Not literally. After making the necessary introductions we set about drinking heavily and talking about hot women and free booze. The topics became even more pertinent as a recent Miss Norway contestant came and sat down by us. A politics student by day and model by night, naturally I engaged her in heated discussion about the perfect governmental system.

Raz: “I find the British electoral system to be very satisfactory.”
Miss Norway: “We tend to have coalition governments in Norway”
Raz: “Strike a pose.”
Miss Norway: “I just did a Jägermeister shot.”
Raz: “Ok.”

It took little persuasion to get me to a party nearby at Njøten’s house where more Jäger and some shots of Bells were doled out fast and often until oblivion was reached, laughed at and surpassed. It was 6am before I decided that it was time to get back to the hotel. After a lovely walk around the harbour I found myself outside my hotel much quicker than expected and decided it would be a wonderful idea to go for breakfast right at that point. I had not forgotten my pledge! I startled myself as I caught a glimpse of my reflection – a bedraggled pissed-up mess of a Raz looked back at me. It must have been jetlag.

Imagine my horror though when upon entering the breakfast hall, I was refused entry. My name was not on the proverbial list. I had lost the band. I didn’t know how to get back to that house. It was all going wrong. Then they checked if I wasn’t staying in the other Radisson. Obviously I was. What city has two of the same hotel. Quite clearly Bergen does.

After a good night’s rest, comprised of two hours of being passed out, fully-clothed somewhere near to my bed, it was time to get up and have one last look around the city. The fish market was on so I ate fish. It was good. I got back on the plane.

Lorraine are on tour across the country already and their new double A-side single, ‘Heaven / Saved’ is out on October 16 on Columbia. Check out their microsite for a chance to win a trip to either Heaven or Hell. Yes they’re both places in Norway. Mental!