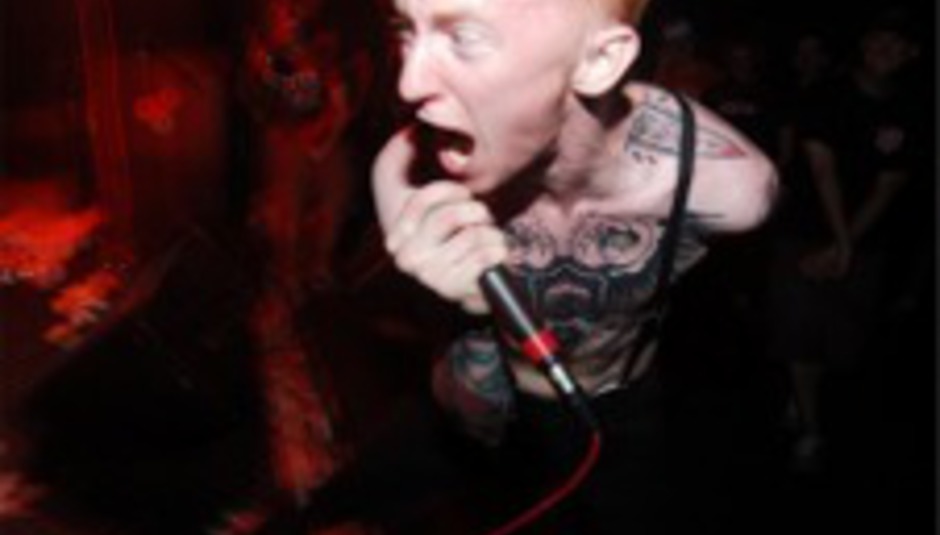 They went absolutely nuts in the stupidly named Bar Monsta and scare little children and grown men alike such is the ferocity and anger! They don’t even do it on purpose!

Gallows are a band of five very, very pleasant hardcore mentalists from the equally lovely Watford. Stuart Gili-Ross is a big chap and he plays bass for them, mainly with his fingers and he really does like the ladies. In fact, the whole band seems to love it! DiS only spoke to Stuart though. Remember that while his thoughts are representative of Gallows, they’re also not. He’s just one man! Another man is Gallows singer, Frank Carter. He's the one in the picture.

If you could be drowned in anything, what would it be?
Big breasts!

Have you had any near-death experiences?
Yeah, a couple. When I was three years old I was given 48 hours to live due to a kidney failure, but some American consultant dude saved the day. A car also hit me while I was skateboarding when I was 17.

On a scale of 1-10, how good/bad do you look naked?
I’d say an 8! I have some rad tattoos and I’m hung like a fairground donkey!

What's your favourite childhood memory?
Losing my virginity. That shit fucking ruled!! It was with a totally hot girl as well.

What was your worst haircut?
Haha! A centre parting with a grade 2 undercut… oh dearrrrr. I’ve just started shaving my head so now I don’t have to worry about that shit.

Who or what do you miss the most?
Probably my grandparents. We were very close when I was growing up and their passing away is my only experience with loved ones dying.

What has been your most notable experience with fans and admirers?
In Newcastle this cute, polite-looking girl punched Frank, our singer square in the face during a song. But he was asking for it. Literally.

You spend so much time together, how do you stay friends?
We don’t! Haha. Nah, we just give each other a lot of space when we aren’t doing band stuff.

What band do you wish your band were as good as?
JR Ewing were all amazing at their instruments. Same with Refused. We aren’t the most technically able band at times but we are getting better!

What's your favourite booze?
Jack Daniel’s because I can drink it all night and not turn into an arsehole.

Gallows’ debut album, Orchestra Of Wolves, was released on October 25 on In At The Deep End Records and is bloody brilliant.