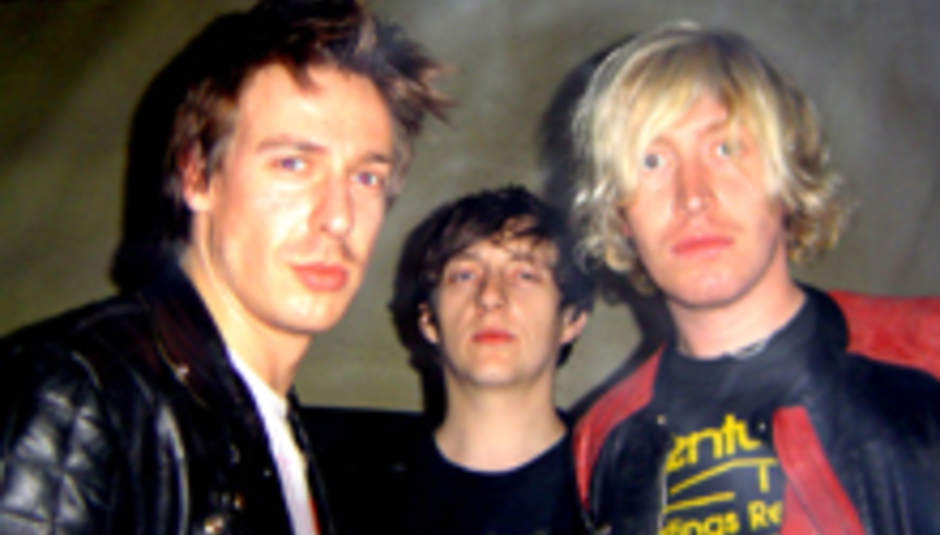 Last week, The Martini Henry Rifles launched their excellent debut album 'Superbastard' at The Vibe Bar, in London's fashionable Brick Lane. The punk trio had aimed for a certain dignity amidst a stylishly Indie clientele, but plans crumbled as a feather pillow burst on contact with a stage-invading fan.

"That whole place and everything in it went snow white," Fudge Wilson explains. "I couldn't believe how far they spread. It happened at the end of the night and we were all sweaty so it looked as if we'd been tarred and feathered."

"You were in black so you came off the worst," Chris Warlow mocks, pointing at Fudge. "You were like Stig of the Dump!"

"Yeah," he concedes, laughing. "So in the middle of trendy London there were these three boys walking about just coated in feathers."

"We must have ruined about £2000 worth of haircuts that night," recalls Cez Mathias with a certain vandalistic delight. "When I took my shoes off, they were full of the stuff."

The Martinis have been together for around four years, during which time they decided to learn how to actually play their instruments, as well as gradually easing a bit of structure into what used to be their "two-hour long pure noise sessions". They have pulled off (surprisingly, some might say) a fiendishly well executed first album that has just the right amount of tight-ass craft about it while keeping the punk code as fresh as the day it was first scrawled in shit.

The band have just returned from the Poppkom Music Trade Conference in Berlin, where they were part of the Welsh delegation sent forth to make friends, influence people and generally spread the word.

DiS comfies herself on one of FF Vinyl's sofas to fire a few questions:

"We didn't really get to see much of Poppkom actually. We spent most of our time going round German flea markets," admits Cez, while Fudge remembers the important bits:

"And trying to find eggs and bacon, but we didn't do too well."

"We played out there with Selfish Cunt and it was a cool gig," says Chris, contributing the first music content to this interview. "The crowd seemed really into it but it was a shit little venue. It was just a cave, a makeshift club under a railway arch. Because it was in East Berlin, everything was as old-school as fuck. There were like, amps there from the 50s."

Did you feel suspicious when you knew you were going there or didn't they tell you about all it? (Quizzical faces can't work out why they are being asked this.)

"No, we loved it!/It was great!/It was superb!" comes back at me in triplicate.

"It made it more interesting," explains Chris.

"Yeah, the more random the better," Fudge agrees. " 'Cos when you do The Barflies and all the toilet circuit, they're all much of a muchness and so when you go out there and see somewhere interesting, it's great."

"It was all makeshift and the toilet was made out of some old plastic signs and hoardings leaning together with a toilet plumbed in between."

So you put a new meaning into doing the toilet circuit if you go round comparing the loos?

"Coventry is good," says Cez, warming to the theme. "They only have half a toilet. You look round the back and the other half has disappeared."

"And Metros in London too. That toilet is great."

Feeling like he's missed out on something big, Fudge pipes up "But I can't remember the toilets! You're doing really well man!" obviously highly impressed by Cez's powers of recall. "I just end up pissing outside."

To end this section on a high note, Cez recalls a recent penny-spending exercise at the Camden Barfly.

The Martinis have had attention lavished on them by one Sean McLusky, the legendary alt-club promoter, general hedonistic firebrand, and agent provocateur behind the Sonic Mook Experiment. So how did the band link up with him 'cos he's sure done a good job on their album?

"We supported a touring band in Cardiff about 3 years ago and he was the tour DJ," says Chris. "He came up to us after the gig and said (cranking up a well dodgy mockney accent) 'I really fuckin' liked that.' We didn't even know who Sean McLusky was at that point so we just ignored him. He must have been given our phone number 'cos he phoned me up about a week later; 'It's Sean McLusky....'"

"He was a persistent little bastard weren't he?" chuckles Cez. "We'd never played outside of Cardiff before so he dragged us up to London and chucked us into all the underbelly and shit. He found us gigs and started working with us from there."

Your original drummer has moved on so did McLusky step in for the album, or what did you do?

"We work with a drum machine now," says Fudge. "There were a lot of problems with the old drummer. Incest; stupidity; affairs; drink-driving charges..."

Do carry on, don't hold back!

("Bestiality!" shouts a voice from the back.)

"It got so bad that he had to leave the country. He's in Australia now with his new wife who's his..."

"No, but close. It would be better if it was," replies Cez, only adding to the intrigue, but sensing things are getting a bit licentious decides to cool things. "He basically had a lot of personal problems so went away to start afresh."

Some of your more easily recognisable influences, such as ...Trail of Dead, At The Drive-in and Mclusky, stand out on the album but who else is big for you?

"Brainiac are big with us. Girls Against Boys, Jesus Lizard, Nation of Ulysses and stuff like that."

"Mostly American post-punk and stuff on Touch and Go records.

"We were really pleased to get Eli Janney from Girls Against Boys in for the 'Infomercial' single, and hopefully the next one as well."

How did your paths come to cross?

"We were introduced to him through Sean McLusky," explains Cez. "It was amazing to have him on board and it was weird to have someone like Eli appreciating our stuff 'cos we've worshipped his shit for years."

"He sent us an e-mail and said we reinvigorated his faith in new music and new bands. He's been working with MOR stuff for a bit just to make some money."

Okay, we've talked about good music but who's got anything dodgy in the record collections? Does anyone want to spill the beans?

Fudge gets excitable again: "What's that 80s compilation we bought on the way back from Plymouth that time?"

"That kept us going but we kinda got lost, 'cos we'd stopped off at some service station and bought 'Hot City Nights' and were like 'This is AMAZING!' And someone" he says, giving a narrow-eyed stare at Cez, "forgot to navigate us properly so we took the old route, pre-motorway days, all the way across Britain. So it took us an extra 4 hours and all the time we were just listening to this compilation."

"Cyndi Lauper, Billy Joel's 'We Didn't Start The Fire', which we later covered."

"We've been doing a few strange covers lately. One Christmas, they asked us for one so we did Aled Jones' Snowman," recalls Cez.

There's a track on 'Superbastard' called 'Ex-Snowman', that contains industrial strength growls and whipping drums behind a Stephen Hawkins-kinda vocal: "They made us do it/They made us change the words."

Another album track, 'Message From John Wayne's Father' has DiS intrigued. Is it about the actor or do you have a mate with that same name?

"It's about the real cowboy John Wayne's father," Chris explains. "We heard stories saying that he was a lot cooler than his son. Then Cez had this weird dream about him..."

At the end of the month, The Martinis are off round the country for a couple of weeks with their previous gig partner, Selfish Cunt. This correspondent hasn't heard Selfish Cunt and wonders if they sound as abrasive as the name suggests?

"It's him," chimes in Chris, leaving DiS in a curiosity hinterland, "and a guitarist, and a new drummer called Bambi."

Laughter and imagined tackiness, followed by a side step and a fresh line of enquiry.

So what are your greatest fears?

More puzzled looks, so DiS suggests, "Losing my penis to a whore with disease?"

"Haha. My greatest fear is losing the drum machine," says Chris in a cold sweat. "It's an old vintage Moog thing that I managed to pick up a couple of years ago, but the other night after a gig we couldn't find it anywhere. It was half an hour of 'Arghhhhh....' but one of our mates had taken it out to the van."

Fellow Cardiff scenesters Mclusky are currently touring in the US and Fudge has heard that they have just had £20,000 worth of equipment nicked. The fear for any band of having things stolen from the tour van has diminished lately for the Martinis as this time out, they will see the length and breath of the UK from within an old Police riot vehicle. Tell me more!

"It's fully bar-ed up, and there's a little hatchet to the front. It's like a fucking tank, it's unstoppable."

Where did you manage to find one of those?

"Ebay!" they shout. "There are all kinds of buttons in it and lights flash and we don't know what they do. And there's a vent that looks like CS gas came out of it once, and we hope it's empty now."

To wrap things up, what about new music yourself. Are you still exploring?

"We still want to hear more stuff," Cez reports. "When someone gets something new, then we all move through it together and it's like "What the fuck?!?"

"'Cos that's the thing really," condenses Chris. "We were always more music fans than musicians. We always thought it was more important to listen to good shit than get it technically spot on or know your scales and shit."

Yeah, yeahs of agreement fall into a moment's thoughtful silence. But Fudge breaks it with;

"I learnt a scale once!"

"Did you?" asks DiS encouragingly.