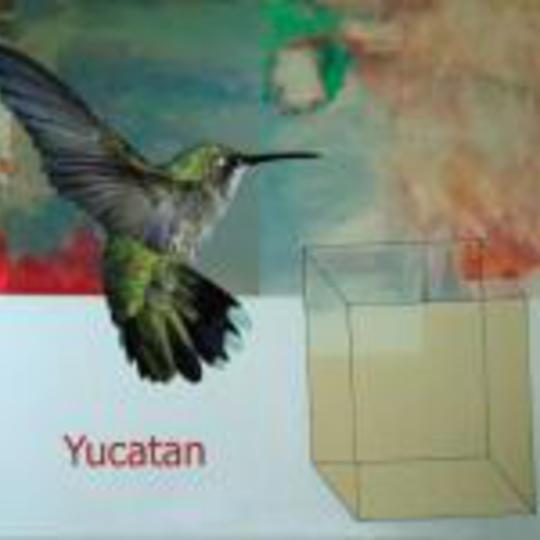 The conceptual framework of one man fleshed out elegantly by the musicianship of a talented quartet, Yucatan’s self-titled album is a long-player of rare grace and understated grandeur. Said core protagonist Dilwyn Llwyd constructed the record in his mind over a number of years, during which time he departed his native Wales – the record is sung entirely in Welsh – to settle for a while in Catalonia and, entirely accidentally, pass some hours away in the company of members of Sigur Rós. That Yucatan could be mistaken as the work of the Icelandic outfit is, almost probably, no coincidence.

Taken as background noise – wallpaper surrounding circumstances no lending themselves to concentrated and appreciative listening – it’s entirely likely that Llwyd’s mumbled vocals could be misunderstood as the musings of a man from an island far further north than the spectacular landscapes of Wales. Yet don’t assume the low-in-the-mix vocals are a by-product of in-studio nervousness – everything is woven in such a fashion that layers ripple and rise organically, and when a word or two is lost to the ether it’s so that another wave of instrumentation can bubble towards the surface.

Recorded at the Sundlaugin studio in Iceland – a complex built into a converted swimming pool – this debut album has an enveloping quality to it that’s hard to convey precisely in conventional critical language. Purrs of comfort and contentment are difficult to transcribe, after all, and while there’s certainly nothing amazingly remarkable about the sound-sculpting on show, everything’s sewn up with skilful subtleness. It just feels nice, really, really nice; it’s hardly going to displace the more renowned post-rockers of this world from their perches, but it’s a fine first effort from a man – and band – who clearly gaze with wonderment at every night sky as if it’s the last they’ll see, counting the stars one by one until it’s mapped to memory.

It’s up there that Yucatan will sound at its most perfect, when the only object of note against an ocean of darkness is our own Earth. Llwyd’s music is that transcendental when at its finest, and we’re already looking forward to album number two and more of the same, if not just more.