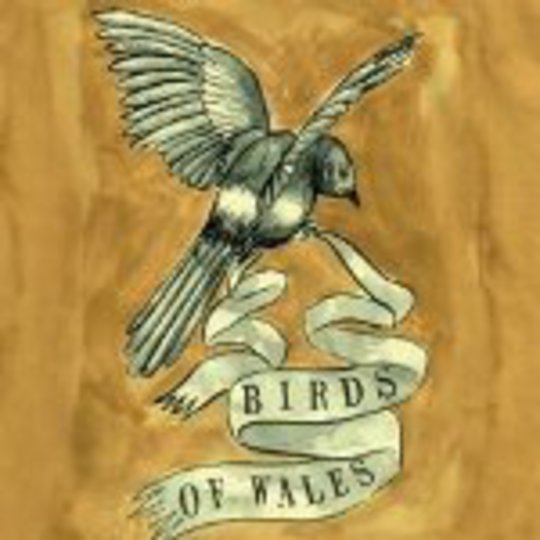 Listening to Toronto’s Birds of Wales hark on about the fall of the 49th parallel, all I think about is the exact opposite. The 49th parallel, or for the idiots in the group the border between Canada and the United States, is not falling; instead it is being fortified by mandatory passport regulations and general fear of anyone who does not look like you. Yet, on the title track, the quartet asks: “What kind of world are we living in, when we have to lock our doors?” Therefore, I sense a hint of irony or cynicism in their lyricism come EP title. So, the Fall of the 49th EP asks some tough questions in the libretto, from Hobbesian fear-mongering to why people rarely see the beauty in ballet dancing. Yet, that is the main fault nibbling at the heels of this EP. The Canadians’ UK introduction is not a dissonant, moody record, but the lyrics are bleeding for dark, devilish melodies, something that pierces the skin and leaves a nasty bluish mark. What we get, instead, is a slaphappy, bluegrass-infused alternative country romp that almost refuses to give into more morose themes, even when elements of the sound are crying out for them.

Each song rarely screams, let alone bites the listener to take heed to what the band is trying, or what I think they are trying to bring forth. A few needless and average love songs do not help (‘A Few More Days’ and ‘Cinderella’), but those could be forgiven if other songs picked up the soppy slack a bit. But, alas, no dice: even the title track, which begins with a gorgeous distorted melody line akin to early Wilco and Uncle Tupelo, barely engenders the mood required to make the song stick to the ribs, as the melody loses itself in its own positivist consciousness. For a song speaking about mass hysteria and the end of the world, it sounds way too fucking jovial. While the band sings, “there is nothing out there but smoke,” what’s inside does not contain even a trace of fire. Ah well.

Moving on, ‘Life’, a coming-of-age tale that tells the story of a less than thankful child who moves out without paying ode to his loving parents, is more of a wading lullaby than a caustic statement, while ‘Every Night’ and ‘Sicamous’, by far the two moodiest pieces of the EP do flirt with Nick Cave-ish nastiness, but they leave any hints of exploration empty, choosing instead to placate the listener, rather than infuriate them.

With the Fall of the 49th EP, I am upset with the Birds of Wales, simply because this music did not upset me as much as I’d hoped. I felt something moldy and ominous embedded in the wings of the band, but upon investigation these wings are clean, too clean. Maybe I missed the point entirely. Instead of commenting on the state of our wretched world, the Birds of Wales glossed right over its foibles in an attempt to point out that love, or at least the core of love and all things attached to its power, is still pure. Maybe I am too cynical and sarcastic to fall for such bullshit, or maybe I think the Birds of Wales are capable of something much more morbid, thought provoking and evocative; or, in short, much more.