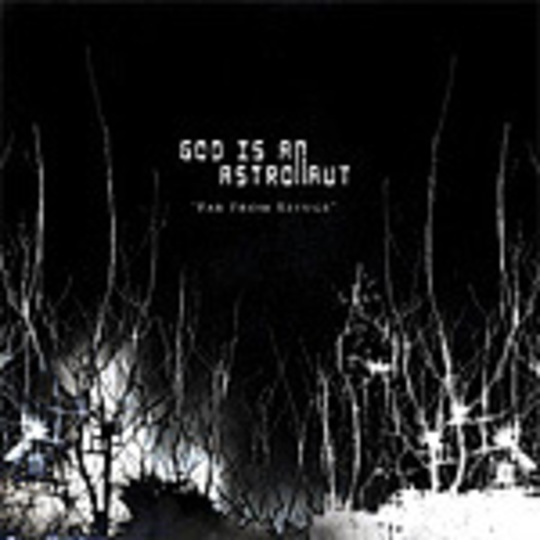 As any working mother of four from middle England will tell you, drug dealers are a menace to society. They hang around outside school gates waiting for innocent children to come out so they can get them hooked on crack. The first hit will always be free, and then the quality of their items-for-sale will drop off sharply. Before you know it, your little tyke will be hooked, and whatever they buy will never be enough, as it'll never recreate the same first euphoric high they experienced.

While I'm not suggesting the members of God Is An Astronaut have produced an inferior product, it wouldn't have hurt them to put a warning label on their new disc. On their previous albums, Lloyd Hanney (drums, synths) and Niels and Torsten Kinsella (everything else) created music that packed a visceral punch to the senses. Their last album, All Is Violent, All Is Bright, was pretty much the aural equivalent of the finest crystal meth money could buy – it entered your system and set off a depth charge just below the medulla oblongata. It ran rampant through the body, snapping nerve-endings and dominating the emotion centres. But above all - and this is what made it a post-rock masterpiece - its impact on the listener was as instantaneous as it was devastating.

It's that crucial immediate power that's missing from Far From Refuge. By contrast, their new album reveals its pleasures a piece at a time. The emotional rush is still present in parts, but it's not offered up instantly; this time, the listener has to wait for it. The opener, 'Radau', is typical of what to expect over the rest of the album, in sensory reward if not in structure. It arrives on echoing synths, programmed beats and eventually hissing snares that wash into an undulating guitar line that climbs and falls like a bottle bobbing atop choppy waters. The song cuts in and out of calm and stormy passages and then the bottom drops out. Keys, then bass, then guitars push ahead furiously as the frenetic drums lock in behind like a tidal wave rising up fifty stories behind a surfer; then the wave breaks as the drums charge to the fore. By this stage it's all the Kinsella brothers can do to hang on, as Hanney hammers out a punishing drum attack, sounding for all the world like he's playing the kit with six arms. In the end the track delivers, but it takes a while to get there.

And it's this approach that is prevalent through much of the album that may initially put off anyone who had their frontal lobes pulverised by the band's last platter. Far From Refuge is a more staid and, at times, gentler affair than its predecessor, and it requires a degree of patience. The haunting, almost mystical quality of GIAA's sound is all over the disc; ‘Darkfall’ mixes muted synth lines with mournful piano to create an beautiful, if understated, ballad; the title track pulls the listener down into its murky depths, and then bubbles along gently until giant strums pole-axe the song and send it surging towards its urgent conclusion. The closer, 'Beyond The Dying Light', ranks as another high point; guitar lines form a cone of hollow static, and then layer upon layer of effects build until the track breaks in the chorus. It's this build and release effect that GIAA have used to such heady perfection before.

Any album given the unenviable task of following All Is Violent, All Is Bright was always going to suffer by comparisons unless listening to it actually opened a gateway into a fantastical parallel world - revealing not only Hanney's and the Kinsella's real point of origin, but the source of their musical ability. Far From Refuge doesn't do that; it's a compelling listen in its own right, but it's nowhere near as instantly gripping as the band's previous effort. GIAA are probably incapable of making a bad album, but next time round, they shouldn't be so hesitant to go for the throat. And the heart. And everything else, while they're at it.