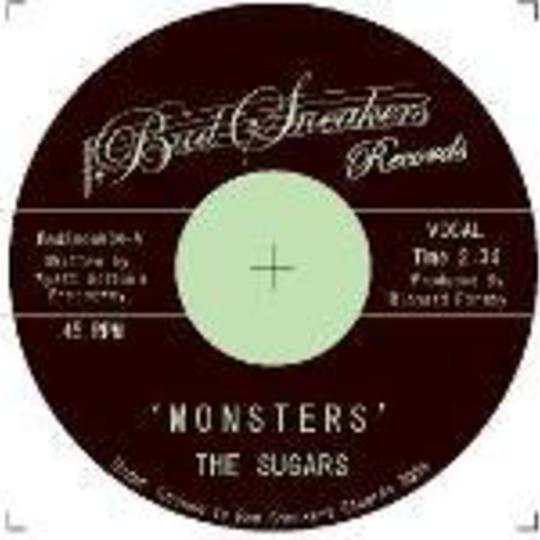 Thankfully ‘50s throwbacks The Sugars’ sense of energy and playfulness save them from such a plight, and with Phil Jupitus throwing his considerable weight behind latest single ‘Monsters’, maybe the future isn’t something to be feared for the sartorially-resplendent three-piece after all.

But whereas live The Shugs set hearts to reeling with their gut-wrenching teeny-bop melodrama, on record it all sounds curiously flat. The bass drum thumps along indiscriminately, the guitar buzzes with the right mix of barely-legal sex and horror, but what should be a straight-up knee-trembler winds up being an unconvincingly faked orgasm at best. Matt does his best quivering Vincent Price impersonation halfway in and it’s camp enough to untwirl even Jack White’s panto moustache, but even then it’s more Les Dennis in_ Extras _than Noel Coward.

A shame really, ‘cos they’ve saved the best for the flipside – ‘Serenade’ is a delicious tale of teen heartbreak fetishised and held hand-wringingly aloft as tragedy, putting it close in spirit if not in sound to The Shangri-Las’ ‘Leader Of The Pack’. Matt’s guitar plays high and lonesome while he and Anna spin out a hokey tale about a gunned-down lover, their sultry vocals entwining like stage smoke curling round a fifties-style mic. Sighing major sevenths add a touch of blue velvet to the proceedings, while Matt musters a heartfelt upper-register croon, albeit faltering slightly when he comes in flat on that all-important money note.

A story of two halves, then, but viewed on their own candy-striped terms, you’re only ever as good as your last 45, and on that basis The Sugars are still waiting to get born.

A Day Another Day