We Were Dead Before The Ship Even Sank 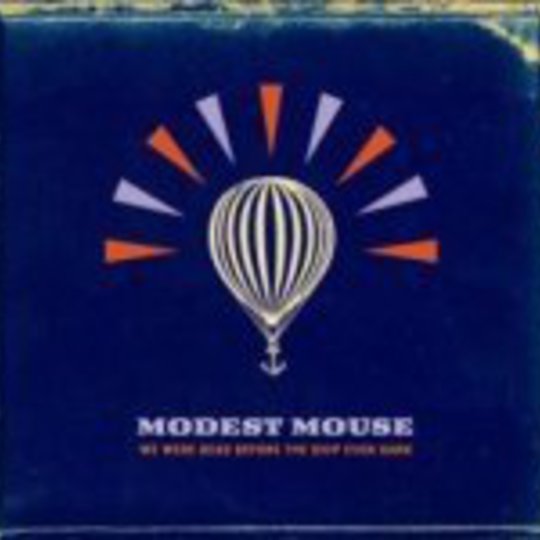 A Beckettian character with a mile-wide misanthropic streak, I always thought of Modest Mouse frontman Isaac Brock as the kind of guy who gets kicks out of imagining his own funeral. Brock possesses such a powerfully self-defeating intellect it’s a wonder he ever opens his mouth to speak at all, except, one suspects, for an overriding fear that one day the earth will come and swallow him up and leave nobody left to mourn his untimely demise.

Which might go some of the way to explaining the length of his band’s fifth album, We Were Dead Before The Ship Even Sank. Clocking in at a formidable 62 minutes, and feeling much longer than that, it quickly becomes clear that Isaac’s got lots to say. Christ, it’s longer than a Mike Diver album review. But we’ll get to that in a moment.

Because while a quick glance at some of the song titles will tell you Brock is still digging himself the same metaphysical holes (‘March Into The Sea’, ‘Fly Trapped In A Jar’), musically We Were Dead… is a significant development for Modest Mouse, not least thanks to the addition of a certain ex-Smiths guitarist to their already-swollen ranks.

It’s difficult to gauge exactly the extent of Johnny Marr’s contribution to the album, although he certainly did have an input, and the sprightly funk guitar-lines on lead single ‘Dashboard’ would seem to back that up. That first release gives a fair indication of the album’s ambivalent courting of mainstream attention (it went in at #1 in the US) – instrumentally it’s all slick strings and straight-up dancefloor rhythms, but it’s also punctuated by an unprecedented, hectoring vocal courtesy of Brock. Worse, he seems to have decided it rather suits him, and proceeds to bludgeon the listener with a series of haranguing performances which sound like the addled rantings of a tramp.

Nonetheless, a radio-friendly sheen is apparent in ‘Florida’’s strident chorus and ‘Missed The Boat’’s bittersweet lament, the latter buoyed by a swoonsome backing vocal courtesy of the evergreen James Mercer. ‘Parting Of The Sensory’ is the album’s centrepiece and Brock’s expletive-ridden attempt at nailing his thematic colours to the mast, as it were, spitting existential lines like “this fits like clothes made out of wasps!” and “someday you will die and something’s gonna steal your carbon” over a raging sea monster of a jig. Nice.

Futility and keenly-felt contradiction are Brock’s stock-in-trade, and his bemusement at blind human endeavour resurfaces throughout: “Our ideas held no water but we used ‘em like a dam”; “It didn’t seem we’d lived enough to even get to die”… Honestly, I could go on.

But I won’t. And maybe the band shouldn’t have, either. The narrator in ‘Little Motel’’s wish that a loved one would miss him if he “just didn’t exist” may be an unconvincing attempt to reconcile the album’s suffocating themes with a semantic sleight-of-hand, but putting it at the end of the album would at least have given the record a satisfying narrative arc; instead, the band opts to bolt on an exhausting extra 20-ish minutes of superfluous material. ‘Spitting Venom’ is a particular own-goal; eight-and-a-half minutes of bombast stacked onto a ludicrously slim premise.

In fairness, We Were Dead... excites almost as much as it frustrates; the problem lying not so much in its commercial aspirations per se as an occasional inability to integrate them into a satisfying whole. That, and there’s too much shouting. And it’s way too long. And so is this review.