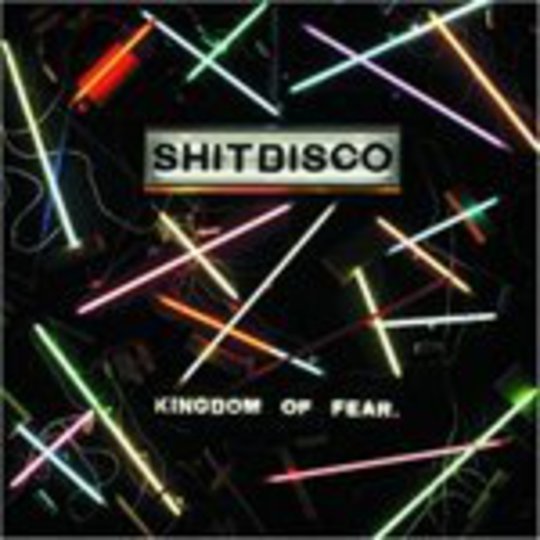 Stupidity is a difficult thing to convey convincingly in pop music. Shitdisco, apparently a synonym for a very clever brand of effected stupidity, are trying very hard to make everyone think they're stupid. If people think they are stupid, it'll come as a surprise when they turn out to be quite clever, won't it? Yeah, that'll confuse those suckers. Also, those dullard narratives about taking women home will just seem like they're trying to sound nasty. Portraying characters. Ooh, frisson!

Well anyway, it doesn't quite work, despite massive hype and genuine goodwill from the press and the public respectively. All that sass and sauce and reference to their parenting musical institutions does little to separate them from the mainstream, be that a goal of theirs or not. If not, then they'll make a frig-load by continuing to supply LCD-lite anthems for the Camden crowd. If so, then they'll be bored rigid and pack it in inside a year. No amount of seemingly boundless energy will stop that.

Musically (this matters nowadays, apparently), Kingdom Of Fear is blistering in pace, inventive in delivery and quite a lot of fun. Not massively fun, mind. They trip over themselves trying to sound like this is effortless music, when it is clearly massively difficult to execute. Beats are ferocious enough, but the bass bobs ever so slightly behind the action, like it's tied to the leader's feet and is trying desperately to keep up. 'Another' is a step too far towards ineptitude, sounding more flaccid than slicker New York contemporaries. And with this brand of disco (not just Shitdisco), slickness is what counts.

Where we are presumably supposed to clutch our sides in a state of relief, i.e. the quiet bits before the songs explode once more, Shitdisco sound painfully non-committal. The opening of 'Lover Of Others' is a case in point, taking an age to find its feet. There are careful build-ups and then there's just directionless action without goals, and Shitdisco fall somewhat full-faced into the second category. 'OK' is cod-Franz funk with none of the disco elements that make other tracks as enjoyable, and actually quite forgettable. Say what you want about the value of repetition. You've got to repeat something worth hearing for it to truly stick.

But it's not all bad. Certainly not. Lots of Kingdom Of Fear is pretty good. Honest it is. When they believe in their riffs and go full throttle, Shitdisco are fucking fun to listen to. The opening ridiculousness of 'I Know Kung Fu' is probably an indie disco classic somewhere or other, and the closing smashes of 'Fear Of The Future' are similarly swell, but there's not enough on display at the moment to elevate it above a surreal combination of independent kudos and rather boorish pub-dance not seen since baggy died out. Promising, yes, but crucially lacking.