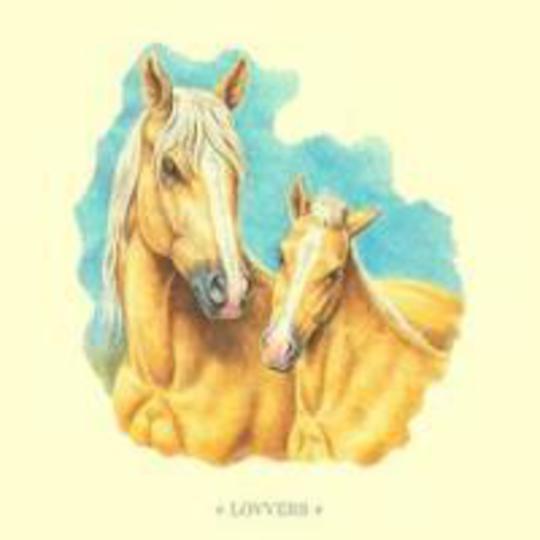 These songs initially found their way into the public’s ears through a demo CD (An Impossible Object) distributed for just a couple of quid at the Nottingham quartet’s exhilarating live shows, but now London-based indie label of no little credibility Jonson Family – they released the first seven-inch by Blood Red Shoes, don’tchaknow – have done the right thing and stuck four of five onto a neat ‘n’ tidy slice of wax. Nothing fancy, nothing superfluous: black vinyl, punk-rock heart.

Only ‘The Boys Club’ fails to make the transition from CDR to release proper, leaving the quartet of ‘A Good Book’, ‘White Lines’, ‘A-Z’ and ‘No Age’ to inform the uninitiated exactly why DiS highlighted Lovvers as one of our tips for 2007. This band is fucked; these songs are all over the place, messy and scrappy and ropey of recording quality but brilliant nonetheless. They’re utterly, awesomely pure. They are loud, with guitars slashed at in time with accelerating pulse rates and drums bludgeoned into pieces. Vocals are there, but completely detached. They are more punk than your band’s most punk songs, without even trying to be punk. They’re not punks or rockers, they just are. They’re perfect examples of a band channelling their most-pissed fuckin’ fuck you emotions into music and capturing, accidentally or otherwise, something strikingly special. These songs lift you out of your seat, kick you in the balls and poke at your eyes. These songs are not your friends, but fuck do you ever want them to be.

Buy this today before you regret it tomorrow, as there are only 300ish of these beauties being pressed. Really, folks, in all honesty: act now.