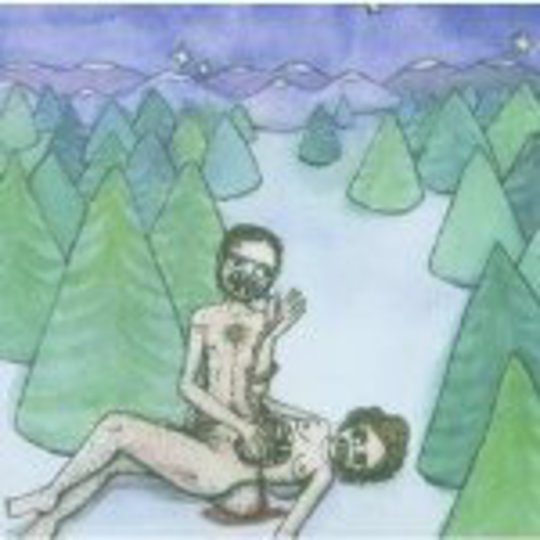 “There is a joy / you can’t contain / there is a feeling / you can’t explain.” It’s funny because as I listen to a lyric from opening track ‘The Dream Before the Ring that Woke Me’, I realise it describes David Karsten Daniels’ debut for Fat Cat quite well: Sharp Teeth arouses feeling in me, and I definitely can’t explain exactly why because nothing he’s doing is very stop-you-in-your-tracks distinctive. His buttered-up arrangements with a full band don’t conjure anything you couldn’t hear on a recording by Sufjan or a million others, and his solo acoustic numbers exist more than anything else; they don’t jump out at you with particularly evocative lyrics or signature vocal exploits.

As difficult as it is to find reasons to like Daniels, it’s even more difficult to sink his battleship. The entirety of_ Sharp Teeth _is solid as a slab of granite, nary a dullard in the bunch unless you consider consistency to be itself a form of dullness. He sings about the standard stuff: Jesus and the Devil, life, communications... you know the drill. And much like the latest generation of indie rockers, he’s wont to stack, stuff and stagger different instruments throughout the course of each song. How he manages to compose the way he does without cluttering is anyone’s guess, but Daniels pulls it off. When you hear the toot of a flute or wonk of a sax you’ll know it’s there because it couldn’t have been any other way.

Best of all, the troubador has that extra something where songwriting is concerned. His songs seem familiar yet distant. Not only that, his voice – while devoid of attention-getting devices so common of his ilk – is emotive without the whiny factor causing the listener to roll his or her eyes every few minutes. He sounds passionate and locked into the mood of each song, and as you hear him dissolve his being into a flurry of chords you’ll find yourself drifting away with him, clinging to every subtle creek of his voice. As he often takes his sweet time to get his tracks off the ground, be prepared to stay a while. Take your shoes off, smoke a pipe, light a fag; do whatever it takes to keep you planted in your seat for the entirety of Sharp Teeth. As it sinks its bicuspids into your brain you’ll realise what a talent Daniels really is, while also wondering how he excels without the showiness we’ve come to associate with multi-instrument rock. Then you’ll realise some mysteries are better left unsolved: don’t question the hive if it yields fresh honey.

Fear Of Words / This Is Vanity