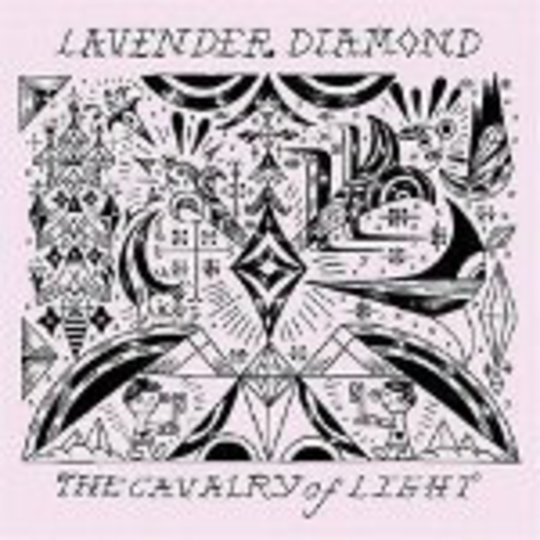 It must have been six months ago that I first heard Lavender Diamond. I saw them live at Latitude Festival, with a set which left the crowd quite perplexed. You see, this four-piece are a folk band. Folk acts tend to go by the tradition of being weird and different, but I’m not sure people were ready for a singer who told everyone that “the war is over” and that we were all “in heaven”. It was like a ‘60s wig-out: all psychedelic drugs and holding hands in fields. The crowd found it comical, and unfortunately their sentiments were shared by me, too.

Fast-forward to the here and now and I’m presented with an entirely different situation. The re-issued Lavender Diamond EP, The Cavalry Of Light, has arrived through my door, and this time I’m reviewing it solely on the music. Anything in the past must be disregarded; the recorded work of a band is an entirely different entity to its live manifestation.

What’s clear right from the start of The Cavalry Of Light is that Lavender Diamond clearly wear their influences on their sleeve. Becky Stark’s voice is deeply rooted in the sound of ‘60s folk songstresses like Nico and Joni Mitchell – whimsical, romantic and acutely distinct. Instrumentally, the four tracks here are fairly basic folk fare, but on songs like ‘You Broke My Heart’ Stark’s powerful voice overshadows any frivolous criticism of the musicianship.

What really raises the bar for this EP, though, is its instant accessibility: these songs slip under your skin, inveigle the mind, annoy you to the point that you have to listen to them if it’s the last thing you do. In a sense, it’s pop music.

My only criticism of the EP is that ‘Please’ sounds dull compared to its surrounding songs. Although it sounds like it could well have been lifted from Nico’s seminal record Chelsea Girl, its sedate mood makes you appreciate how great Lavender Diamond are when playing to their epic-pop sound. I envisage that a successful future for the band lies within this aforementioned trait, and I can guarantee they'll win more fans because of it.