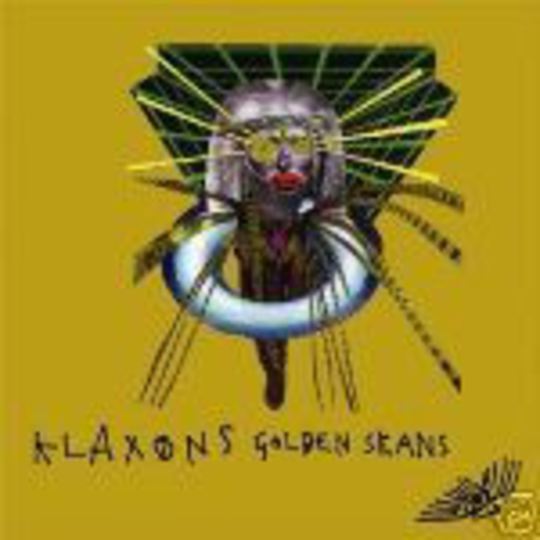 What will 2007 bring for New X's most neon sons? That I couldn't say. What I can say is that if you claim any interest at all in Klaxons then you probably have some idea about New Year release dates by now. This, the band's fourth single, is presumably charged with acting as the album's buzz magnet.

The good news, then, is that 'Golden Skans' is desperately attractive. Undoubtedly more refined and 'pop' than its predecessors, it adopts affectations that are at once stately and addled; tapering up into the glittering stratosphere like a famous Donna Summer song or a dumb firework.

This aspiration is what separates the band's most accessible effort to date from unwelcome company. It is an obvious source of comfort as some point out numbing, crashing similarities to Hard-Fi, (and they are there, most obviously in the verse's propulsive, weebling bassline), to know that this band are aiming above the everyday, and the easy empathy that other band relies on as they aspire to modern relevance.

Unalloyed from the mundane, what does 'Golden Skans' align itself with? Lyrics paraphrase JG Ballard's Myths of the Near Future, the short story from which the name of their forthcoming debut album was taken.

"Light touch my hands, in a dream of Golden Skans, from now on, you can forget all future plans," goes the chorus line, in reference to the rays that Ballard sees pouring through an ozone layer ruptured by decades of gas to come, distorting and eventually destroying the dimension of time in trailing sheets of iridescence.

In the hectic pace of singles past these touches of literacy have done well just to cling onto the fizzing bundles of sonic energy they ride out on; in fact, at times they have barely been noticeable. But when the pace is slowed and the charts staked, it is the presence of their aesthetic which shapes and refocuses the Klaxons of 'Golden Skans' into something worthy of stardom, like the Shangri-Las in space helmets.

Course none of this would mean anything if the tune itself wasn't so ridiculously catchy. Opening with the same chord change as Baby D's monumental 'Let Me Be Your Fantasy', strips of melodies begin to unfurl, melodies that will later wrap each other in layers of cool silk. Wavering guitars reflect the ideas which the band sing in shimmering ink. Taken alone, there are drawbacks - this is nowhere near as mashup as 'Atlantis...' and live it can slow momentum. And it does sound naggingly like Hard-Fi at times. But this should be taken for what it is, first and foremost - a classy slice of pop from a band that are, hopefully, yet to reach their prime.

That I could never even have envisaged reviewing one of the year's biggest singles with the words 'Baby D' and 'Ballard' a year ago amuses me, and the fact that it works so well simply confirms Klaxons' right to revel in the limelight they currently shine in.