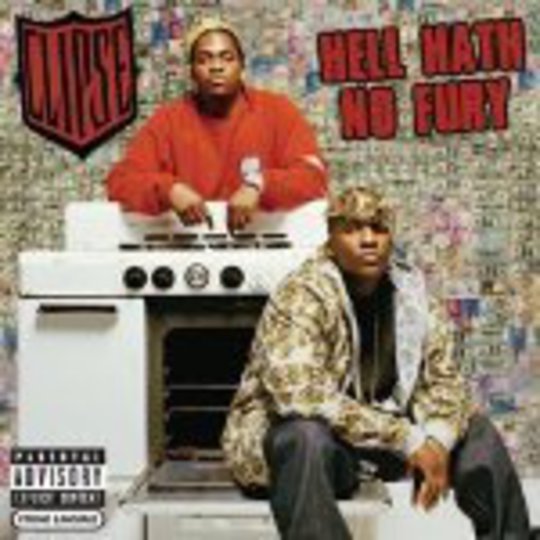 Pharrell Williams was always much more fun when he was hiding behind the mixing desk with Chad Hugo – the other half of The Neptunes.

Thank goodness then that Pharrell has ditched the falsetto love songs and cute cartoon versions of himself to join back up with Chad to produce Clipse's second album. Because The Neptunes' pitch-perfect production allied with Pusha-T and Malice's vicious, witty rhymes make Hell Hath No Fury one of the records of the year.

And I didn't want to say that, either. Ever since reading Vice UK editor Andy Capper's piece about how Clipse were chief proponents of 'crack-rap' I wanted to tut and do my best Mr Mackey impression while quietly skulking back to a corner to listen to some inoffensive indie tat. But I couldn't. Because from the first bar of 'We Got It For Cheap' the two brothers known to their mum as Gene and Terence Thornton drag the listener kicking and screaming into a world of pseudo-glamour, drug deals and, well, excruciatingly good beats.

They've been working with Williams, who shares writing credits on almost all the tracks here, since 1993, which by our calculations would have made Malice 13 and Pusha-T nine – so the the term 'rap protégées' doesn't seem at all misplaced. Williams has stuck by the pair since going into the stratosphere himself, even when they were dropped by Jive after the commercial failure of first album Lord Willin' (something angrily referenced on 'Mr. Me Too').

Speaking of 'Mr. Me Too', one of two tracks featuring Mr Williams on vocals, it's one of many highlights from the album. It starts off with Pharrell boasting about hanging out in Aspen with Puff Daddy and "ten hoes" while Pusha-T and Malice respond by pronouncing that for all Pharrell's starry antics they too have got the Mercedes and Covalli furs from their, ahem, investments in "grey and beige" dust.

It's the kind of self-aggrandising macho nonsense that makes you despise much of the genre, but the reason Hell Hath No Fury has attracted that distinct band of indie-boy rap followers (see Z, Jay; West, Kanye; and, er, Kast, Out) is because they manage to merge the murky world of selling crack with popular music of the highest quality. Something you can't imagine Pete Doherty ever doing.

Although it's a stand-out rap album, you have to wonder who approved the cover art, mind. It's awful - it features the pair sitting on an oven in front of a wall covered in currency. Whisper it, but it might have something to do with drugs.