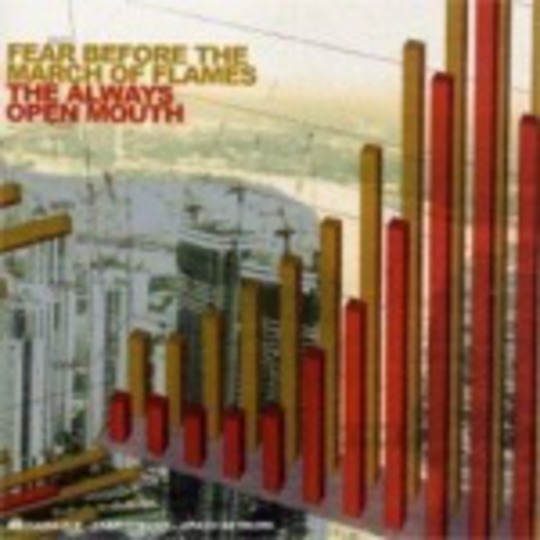 *Fear Before The March Of Flames *should be an album title, not the name of a band, but let that deter you not for _The Always Open Mouth _is a most wonderful proposition. The band's third album will please many fans: they're realising all of their promise with a complex and matured experimental punk record that is both ravishingly beautiful and jaw-droppingly massive in one fouler-than-foul swoop.

Kicking off with a minute of twinkling atmosphere the album builds up towards the controlled chaos of ‘Drowning The Old Hag’. With siren guitars and thunderous drums breaking up the stunningly layered melodies that the verses bring, this is already their finest work to date.

Previously relying far too heavily on distortion and screaming, the addition of an additional guitarist has naturally stratified their sound and has allowed the vocals to take on a new lease of life, cavorting with the guitars to create an often-gloomy choral effect that was missing from the intentionally dark and bitter tone of their previous albums.

While the spooky ethereality of _‘Taking Cassandra to the End of the World Party’ _is adorned with synthesised effects galore, the slowed-down tempo lends an apocalyptic feel to the recording, as if there is a doom merchant on board this ship and they’ve sailed too far from the shore.

With this record FBTMOF fail to suffer from a troublesome mid-section - with emo storytelling this graphic and topical they will never be boring. In ‘High As A Horse’, vocalist David Marion sends a modern medicine-inspired diatribe out (“We trust the local doctor / We trust the medicine / Our child gets a scratch / We give our child a brand new head”) to a gently functioning selection of largely ambient but danceable anti-punk beats, which soon succumbs to a driving soundtrack of bile.

_‘...as a Result of Signals Being Crossed’ _is the beginning of the end. They know they want to go out with a bang and so they crush all thoughts of further mellow moods with a blustering display of dual vocal madness. It sweeps your legs out from under you while soothing your bruised head in the same movement, and the dynamics are sheer genius.

Mark Hoppus' post-Blink project +44 could not dream of creating something quite as deliciously pounding as this album's own ‘Lycanthropy’, with its skewed chords and rumbling industrial feel. From here onwards there is no respite - this is the big bang. After this it’s all over and with ‘Absolute Past’ everything peters out to nothing. This is one of most finely constructed albums of the year.

At the beginning of their career Fear Before The March Of Flames understood how to write a good song. That, in itself, is a rare ability in mainstream-strafing alternative rock. Now they're able to make those songs sound even more brilliant and have learned to understand what selection of songs form a great album. That is rarer still.