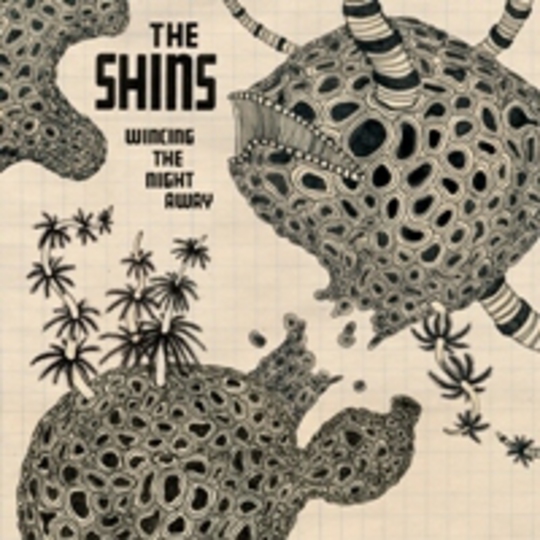 So when Wincing The Night Away was leaked on the internet a full three months before its official release, it was snaffled up by the tech-savvy fans who swiftly registered their responses online. Consensus was split into two camps – “they’ve matured!” cried the diehards, while detractors pointed to the muted tone slick production as evidence that The Shins had lost some of their celebrated sparkle.

It certainly must have come as a bit of a shock. On ‘Sleeping Lessons’, arpeggiated keyboards shimmer and pop like bubbles rising lazily from frontman James Mercer’s watery vocal, but it’s two-and-a-half minutes before the band kicks in proper. Now, two minutes is a long time in Shins-world. Gilded pop hooks soar and beat their hasty retreat; tangents are pursued with relentlessly skewed logic; harmonies stack up and songs twist and turn out of all recognition. So 180 seconds of naught but watery keys is potentially quite worrying. But then swathes of hazy, thunderous guitar noise roll into earshot and suddenly everything clicks into place: it’s a finely-wrought piece of suspense, and the kiss-off is terrific.

Look elsewhere on the album and you’ll find abundant evidence of a newfound maturity, and not in the r’n’b sense of the word. It’s in the slouching, Betas-through-an-opiate-haze beats of ‘Sea Legs’. It’s in the way that the trebly, Cramps-ish lullaby ‘Pam Berry’ segues into epic first single ‘Phantom Limb’, a typically obtuse meditation on small-town life. The latter is classic Shins, but the hooks are more ripe, the delivery less hurried and more sure-footed.

Mercer has cited insomnia as a major influence around the time of writing for the album, and that much figures. If Oh, Inverted World and Chutes Too Narrow were like ADHD-riddled cousins, unable to inhabit their own thoughts for longer than a few seconds at a time, then Wincing The Night Away is the Ritalin-gorged riposte. Its bounce is more bleary-eyed; its euphoric bouts tempered by a weird, waking-dream sensation that some dark presence is stalking the peripheries of its foggy vision.

New Mexico may be a long way from palm-strewn beaches of California, but Mercer remains the Brian Wilson of his generation, an unrivalled pop conjurer whose elegant way with a melody dispenses with the notion that pop’s strictly for tarts. On Wincing The Night Away, he dispels yet another myth, that maturity and pop music go together like foot and mouth. So says we: roll on middle age.

Zapped By A Million Volts

What's The Miles Per Gallon, Alan?