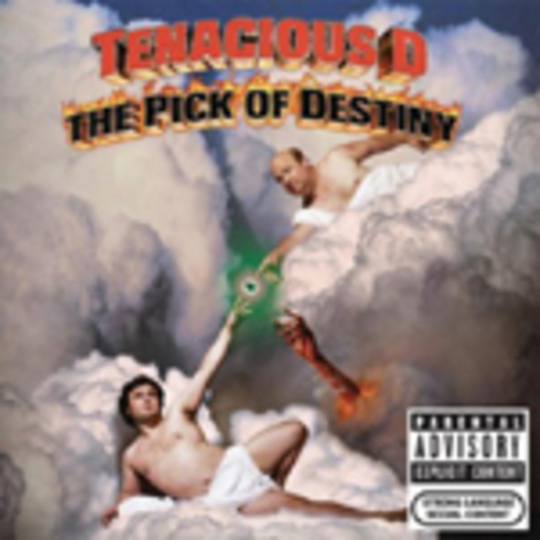 Tenacious D are rubbish. In fact, all comedy bands are rubbish. From 'Weird' Al Yankovic to Goldie Lookin’ Chain, Spinal Tap (who were funny, but still rubbish) to U2, to Jack Black and Kyle Gass's Tenacious D. The Shirehorses had their moments, mind.

Now that Jack Black has proved he can A) sing and B) act (in High Fidelity and King Kong respectively), Tenacious D have finally been given the movie they've been trying to make since their short-lived HBO TV series. Welcome to Tenacious D: The Pick of Destiny.

The 'D' first came to the public's attention a few years back when 'Tribute' became the kind of song that was equally as ubiquitous at student house parties as it was in provincial nightclubs.

Then there was 'Fuck Her Gently', which was about as funny as waking up one day only to find that your face has fallen off and been replaced by a cupboard full of hammers. Although, that would be quite funny.

'Tribute' was quite funny the first few times you heard it. Just not the ninety-fourth. Black has been in some funny movies and Tenacious D, as a concept, are mildly entertaining. So, ipso facto, the film might be worth a watch.

But who - who - in their right mind would buy this album? Listening to the word "fucking" being sung over 'Stairway To Heaven' gets old very quickly. So, unless your demographic is a bunch of pre-pubescent 14-year-olds who think Bo Selecta! is the height of contemporary wit, there’s not a lot of mileage in it. Oh.

Anyway, the album tells the story of Jack and Kyle's mission to retrieve some magic plectrum that's made from the devil's teeth. Or something. It's basically a 34-minute excuse for the pair to punctuate lines with the word "yeah!" and for Black to sing his jolly $12m-a-picture heart out.

You can imagine him recording this, gurn firmly ensconced on face, as Gass rivets his acoustic guitar through songs with such eye-bleedingly funny titles as 'The Government Totally Sucks' and 'Kickapoo'. Fantastic.

Not only are these not the greatest songs in the world, they're not even a tribute to them.