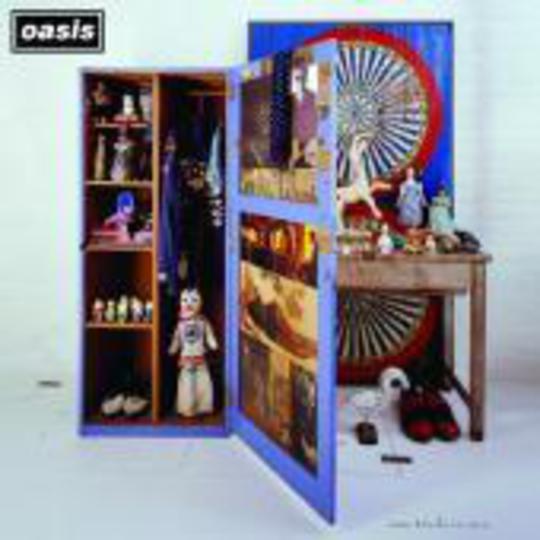 Well I suppose it had to happen sooner or later, and to be fair it has taken twelve years for arguably the biggest band to come out of Britain since The Beatles to finally put out a best-of compilation. While Stop The Clocks can't be described as being anywhere near definitive, its tracks still knock giant spots off most of the album chart competition out there at the minute.

While it has been a popular pastime for indie elitists to regularly knock the Gallaghers - particularly since the admittedly dynamic-less duo of Be Here Now and Standing On The Shoulder Of Giants - it would be difficult to imagine any music lover of a certain age, whatever genre path they eventually followed, not owning at least one Oasis record. Indeed, the chances are that the average DiS reader has probably got most - if not all - of the eighteen songs that make up this album in one format or another. If, like me, you're one of those saddo completists, you may have already taken the trouble to compile your own personal best-of, too.

Forget the fact that this is basically a get-out clause, enabling Oasis to depart from Sony with their heads held high (although that probably explains the lack of new material on here - rumour has it Noel Gallagher didn't want to give anything away to his past employers). What makes Stop The Clocks fascinating is that its tracklisting was selected by the band: bearing in mind that only two of the current line-up played on fifteen of the songs here, that makes the Gallaghers' own admission that they've never really matched the euphoric standards of Definitely Maybe and (What's The Story) Morning Glory quite admirable, and even a little poignant.

Aside from the obvious inclusion of flagship anthems such as 'Supersonic', 'Cigarettes And Alcohol' and 'Live Forever', this compilation also includes some of the band's b-sides, most of which could (and in some cases should) have been singles in their own right. Even now, many of them sound head and shoulders above most of what came afterwards, i.e. post Morning Glory, whether that feeling is because of Oasis themselves or any of the lad-rock pretenders embarrassingly following suit in their wake.

The only gripes here are that only eighteen tracks doesn't really do one of the most influential bands of our generation justice, and also that the lack of material from the band's last two albums (go on, admit it if you dare: Heathen Chemistry and Don't Believe The Truth are actually pretty decent records), which blatantly suggests that Stop The Clocks may just be the start of Oasis's journey aboard the compilation gravy train.

Despite a good decade or more having passed since the majority of these songs were recorded, Oasis's heyday really does feel like yesterday. Like it's been 24 hours since the last time you burst into song about being a rock and roll star, or that you were sniffing Alka Seltzer through a cane. No doubt in another ten years it will still feel the same. I wonder if you'll be able to say that about Get Cape. Wear Cape. Fly in 2016? Who...?