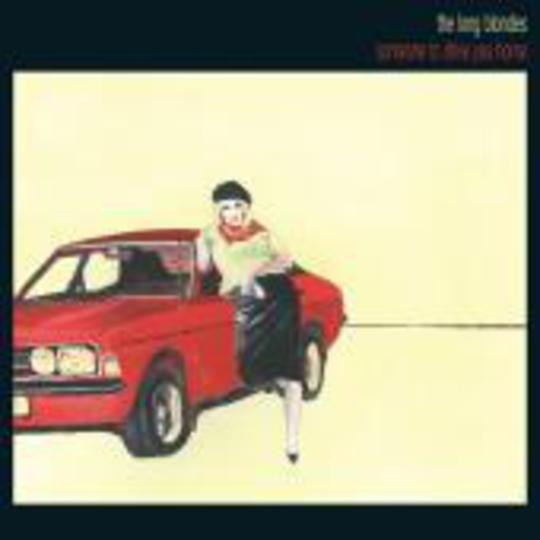 Uttered many times yet oft-ignored, the catchphrase 'pop is not a dirty word' can be digested in any number of ways.

For instance, I've never been one to shy away from a song or artist if their music is the work of a major label marketing department. Time spent dancing around my bedroom to McFfly or Busted is as precious and important to me as reflecting with Charalambides or confusing myself with Sun Ra.

As such, when an LP approaches that proudly proclaims itself to be guitar-pop, the melding of two separate areas of my musical conscience, I am much more likely to approach with caution than with a less ambiguous genre description, preferring people to be straight up with their synopses and just accepting if something is 'pop'.

Someone to Drive You Home is a guitar-pop album, no doubt. It's twelve tracks of gloriously written pop music, played with guitars. It quite literally is as simple as that and in pop, simple = good. Consequently, The Long Blondes = good.

The feedback-laden slowbuild of the first ten seconds of 'Lust In The Movies' hints at a somewhat different affair to what slowly and eventually evolves from this, the opening track. It's almost like a jigsaw puzzle slowly fitting together: as the noise subsides, a chorus erupts and hurls you to the dancefloor, screaming for more.

As the album progresses, more sides of the pop die are exposed. Each song rolls again to reveal a bit more soul, a bit more rhythm or just another great lyric. 'In The Company Of Women' is alluring, sensuous and downright sexy; 'Once and Never Again' is just unabashed melody-mongering, all underpinned by a sense of style and coherence that is missing from a lot of mainstream pop.

Kate Jackson's impassioned and relentless vocals set the band apart from many contemporaries though. Her delivery is like a public address call across a Sunday marketplace. There's plenty of interesting, exciting things going on around you, but when Kate demands your attention, you can do nothing but comply.

Arguably the only thing that lets down this debut is quite simply the fact that, at times, Kate can be a little too much to handle. The moments that prove to be empowering and revitalising when in the right mood can equally show up to be a little annoying and overbearing.

Of course, any minor gripes with this LP are completely forgotten when listening to the indescribable majesty of 'Giddy Stratospheres', the standout track of the album and, quite frankly, a standout pop song full stop. Sounding like the most vital thing you could hope to discover, it's fresh, with a nod to an indie era or two past, and seemingly executed with a wry smile and a pint of bitter in hand.

Someone to Drive You Home is the sort of album that guitar-toting indie bands will be aiming at for a decent while now, but regardless of its influence, right here and now it's just an honest, forthright and accomplished LP.