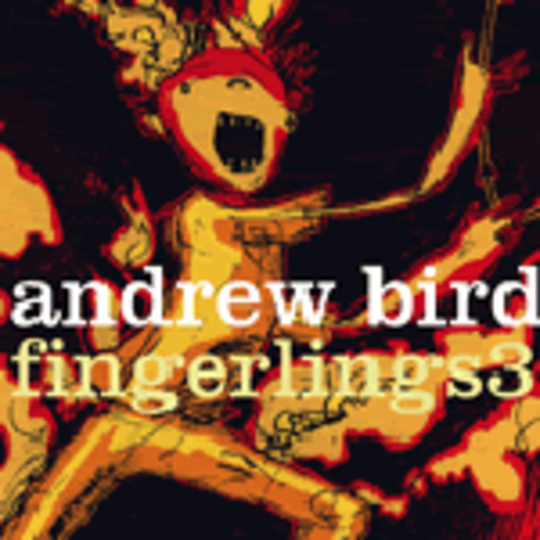 You'd best prepare yourself. Because as you stand in the shadows, the roads down which these songs are travelling in your head are about to take unexpected left and right turns, the odd hairpin or careering curve - melodies expand and contract like anxious lungs, lyrics rewrite themselves in the air. It's almost an injustice to have these songs, so gracefully played and replayed in your head, retooled before your eyes. But then you realise they were meant to be so maleable, so able to build a different body with the same skeleton. This is how a mind functions watching Andrew Bird translate his recorded output to a live setting, and why the third in the official bootleg series Fingerlings, is so rewarding.

Take 'Measuring Cups', recorded live at this year's Lollapalooza with resident collaborator Martin Dosh, whose deft assistance appears on four tracks here. The vocal melody stands on the shoulders of the original, removing Bird's reserved hush and replacing it with an anxious grace. Then in the last minute, Dosh picks the song up and hurls it like a plate against a wall with ecstatic open hi-hats. Meanwhile, 'A Nervous Tic Motion of the Head to the Left' becomes a skittering, fast-paced shuffle of brushed snare, looped violin, spiralling guitar notes and Bird's trademark otherworldly whistle.

Apart from a languorous version of 'The Happy Birthday Song', however, the remainder of Fingerlings 3 is composed of covers and new material, not all of which - for the first time in the series - are live recordings. The most exciting of those on display are two tasters of Bird's upcoming 2007 album Armchair Apocrypha: 'Dark Matter' and 'Scythian Empire'. Both of them are solo recordings, somehow both expansive and minimal, but retaining the charm and curious lyrical wit of '...& The Production of Eggs'. Questions of science, the universe, psychology, politics and history are all weaved together in each. 'Dark Matter' finds Bird recalling veering from his childhood action toys to Operation, and building a gun "that not only shoots but looks real, with rays of Dark Matter", before searching for his inner self: "Do you wonder where the self resides? Is it in your head or between your sides?". 'Scythian Empire' is a steady waterfall of plucked violin strings and footsteps charting the rise and fall of a mass of 8th Century BC Eurasian nomads, with suitably grand imagery: "Five day forecast for black tall rains and hellfire".

After a warm, docile rendition of The Handsome Family's 'Tin Foil', we're left with the second of two tracks recorded at Bird's home studio, 'Ethiobirds'. But instead of all that 'studio' implies - stuffy, cramped spaces and sound bouncing off of walls - this studio is a barn with the doors and windows flung open. Having earlier on the disc played to a rapturous Lollapalooza audience, the crowd is now composed of just-audible crickets and cicadas, who reverently rest on the ground while 'Ethiobirds' billows over them, vast looped string phrases and gentle plucks. Fingerlings 3 is notably the strongest in the series to date, showing both Bird's idiosyncratic skills in both a live and studio setting, and while you wait for Armchair Apocrypha to fall into your hands, it's an essential purchase.