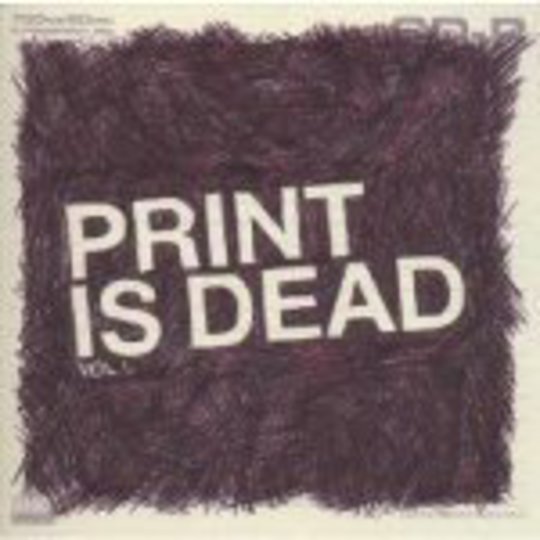 _Print Is Dead _has been touted as the UK’s version of the acclaimed _Desert Sessions _by some of the more optimistic members of the musical cognoscenti. The founders and main protagonists of this tale, yourcodenameis:milo, are more eager to liken this project to that of the much-loved mixtape.

The imaginative appearance of a CD-R with a scribbled-on sleeve and a marker-penned disc is the only thing about this record that looks a little bit more slapdash than it really is. The band intentionally limited their studio time per track, so as not to make the record too glossy. It’s worked: Byker got its groove on.

Fragmentation is the order of the day here. You will have to wait a few months for the next YCNI:M record to hear a complete body of work that flows from first to last, but this is an ambitious compilation; an amalgam of soupçons of work with mutual friends. There is so much opportunity for this to just fall flat on its face. Luckily, there’s more than enough quality in here to save it.

The only place you can see the Geordie troupe’s post-hardcore pedigree shining through is on ‘The Trapeze Artist’, featuring the much-maligned Welsh pop-rockers The Automatic. Aside from this track, the remainder is a thoroughly diverse and pleasing affair.

_‘Wait A Minute’ _with Bloc Party’s Gordon Moakes throws up the fewest surprises, but is as solid a tune as you’d expect, while Martin Grech’s offering of _‘We Hope You Are What You Think You Are’ _is a brooding, swooning beast that will appeal to the wannabe metaller in you. There is, of course, some filler from Tom Vek, Ultra Brain and Hot Club De Paris, but that is to be expected. The rest makes up for it.

Field Music *bring their jumpy tinkering with _‘Deborah Bow’ _and Lukas Wooler from *Maximo Park *matches it blow for blow with glitchy beats galore, but the wicked freshness of *Lethal Bizzle’s fierce invective on the government on _‘Ordinary Day’ _is what makes this record. It might be perceived as an obvious attempt at bold diversity, but then you look harder at the rest of the artists involved realise there’s nothing obvious about this record at all.

Either there was never any doubt that this would be decent enough or they just didn’t give a shit, because yourcodenameis:milo are already planning a second volume. Optimism is not required: the next one’s going to be just as good.