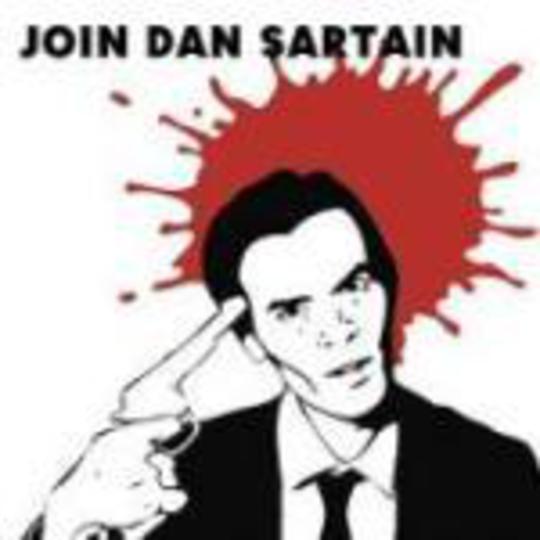 Dan Sartain strums at his guitar as if he’s hacking a bloodstained blade through a cactus to get to the life-maintaining water within; he probably swaggers down his local high street as if on his way to a pistol duel with a rival for his paramour-to-be’s affections. A Wild West spirit of bravery, discovery and romance is distilled and dripped into the soul of a single man, trickling down his throat, sticky and sweet. Join Dan Sartain? Forget that: I want to _be_ Dan Sartain.

Failing that, I’ll gladly join his motley rabble of nomadic gunslingers, riding shotgun as he tumbles to and fro through misadventures fuelled by both the heart and the hipflask. His songs tell of encounters violent – “I know he’s got a gun and I don’t know what to do” – and relationships doomed; his vocals are rich in passion and fervour, concise but delivered single-mindedly, a 911 carrier pigeon to an unknown aid whose true intentions aren’t revealed until the final reel. Dan Sartain knows loss and renders his woe wonderfully: work’s a bitch, the bitch will break your body and puncture your heart, and your crippled frame will crumble to dust without another campaigner for the cause giving a damn. “The ones you love don’t have to love you back,” remember…

Dan Sartain’s a straight-shooting poet in an invisible stetson, uprooted from southern-state turf by his own ragged C&W-cum-rawk approach to songwriting: his tales are characterised by everyday events – the effects of revenge, the blackening of ones dreams by a sole callous act on the part of a former sympathiser – tossed from an open window and left to blow around in the dust and dirt. “If you’re a hanger on, let me sing my songs alone,” he states; yet this is a man frail enough below a seemingly sturdy surface to warrant round-the-clock monitoring. Should his affections go to waste on another who chooses not to reciprocate, then surely Dan Sartain will collapse and never again stand tall and proud. A single crack in the ice is all it will take.

Dan Sartain’s punk-rock via a Tex-Mex restaurant band is insatiable in its swinging, impossible to keep a toe still to. He “whoa whoas” and “yeah yeahs” like an old r’n’r hand; he is but twenty-something, though, his young face hiding a dozen lives lived, his lungs kept clean by his dalliances with seaside surf-rock but his eyes gritty with the sand of a desert or two crossed to reach the coast. He’s never been inside a garage, rocker, in his life – why would he when he rides a horse to his chosen destinations, his crew coat-tailing him in and out of town after town as he meanders across the great expanses of a country so undiscovered.

Shut your eyes tight and_ you’re Dan Sartain. Mark out the name of the girl you love with a flurry of bullets, and save one for yourself; turn the barrel when the shit sticks for the final time, one too many back-alley brawls for a shattered soul to stand. _“I’m not gonna give you another chance… Your pretty face don’t mean a thing to me.”