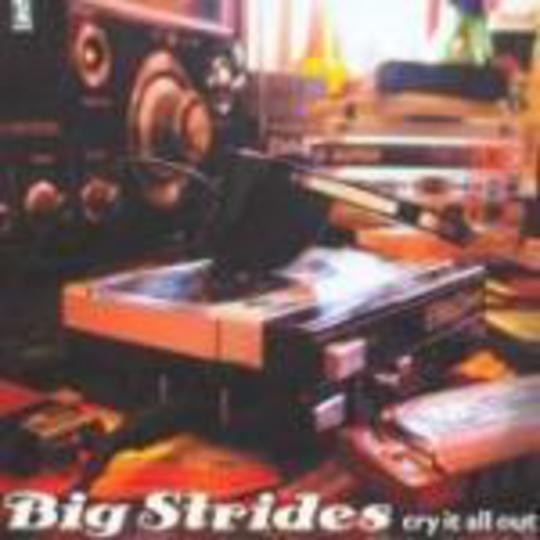 I’ve not heard of Big Strides before (possibly because they’re signed to EMI Japan?!), but Cry It All Out is their second LP. The first thing that strikes me is the vocals – it’s a really weird hybrid of chav meets wannabe rock’n’roll star – not a bad thing necessarily, at least not at the beginning.

Musically it’s varied to say the least, from dirty bluesy guitar solos (‘£2.49’), and harmonica-led funky melodies (‘She Drinks Whisky’), to the oddly paced ‘Sing To Me’ with jazzy tones and space-rock bass. It’s obvious by about the third song in that Big Strides are aiming for the ‘Radio 2 at three in the morning’ audience, while that’s not to say it’s inaccessible, it’s just a bit… well… dull. It’s very difficult to see where this band fit in the current musical climate, while I’d normally say this is a good thing, Big Strides don’t fit because, basically, they’re doing something a bit odd, in a bad way.

The absurd ‘Let’s Get Nice’ sounds like The Streets trying to do jazz (or a jazz band trying to do The Streets, which, let’s face it, is a bit more likely), the weird shouting in the background sounds like Fraggles leaping off cliffs, and the guitar and drum solo at the end is frankly painful.

‘So Long’ is one saving grace, mainly because it’s a bit simpler than the rest of the album: lazy vocals meander across simple guitar lines (here the voice is beginning to sound a bit Pete Doherty-esque, which is thoroughly confusing), and it’s generally quite chilled out. 'Breakfast’ takes us down the road of dirty rock ‘n’ roll complete with grinding guitar solos chucked in alongside some swearing, oooh! The ‘attitude’ doesn’t suit this band at all – especially when you take into account everything that comes before this song – and a bit of sudden griminess seems a bit forced.

The title track reminds me of Razorlight – y’know, when they went shit and wrote ‘America’? Ugh, next! ‘Smiling’ is probably the most radio-friendly track, heavy, prominent bass with interesting guitar touches and a nice build up. ‘What’s Wrong With Lucy?’ sounds like it was recorded in a cupboard (probably intentional, but it’s annoying when the rest of the album is fairly slick), and it plods along in a slightly countrified woe-is-me style.

At first I thought this album would be okay, but after about ten minutes it really started to grate on me. Overall, while fairly imaginative in certain ways, Cry It All Out is very dull and a bit cringe-worthy in places.

I Write Sins Not Tragedies