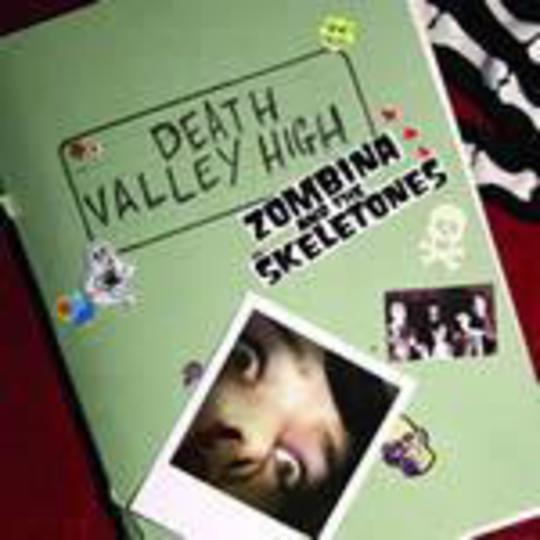 Not sure what genre to choose to soundtrack your tale of a 'teenage horror-addict psycho' and a 'hunky mad scientist' meeting up at a Devo concert and winding up 'destroying the school… and the world… with lasers'? Well: why not go on a hyperactive rollercoaster ride through as many of them as take your fancy at any given point in time, and then mash them all up into surf-rock-doo-bop-synth-pop-harmonising-HammerHorror-just-about-targeted chaos!

Well, why not? It’s worked for Zombina and the Skeletones, after all.

This is the Skeletones’ second full-length album, and is possibly their first release not to feature anything undead. Instead, it sticks to the more realistic Dissolvo Death Ray concept, which in the hands of a young lady deranged by unrequited love and too many B-movies creates the kind of carnage that can only be adequately represented by arcade-game waves of synthesisers. Well – synths with a bit of help from crunching guitars and _“Everybody’s gonna die! Eeverybody’s gonna die!” _call-and-response vocal harmonies.

And once again, as the record fizzes, bubbles, soars and poses its way through 32 minutes of electro-surf joy, we are forced to conclude that it’d be really fucking hard to trump Zombina and the Skeletones as purveyors of trashy horror thrills – and that the world would be a far more enjoyable place if more people tried to. Although I often hear songs and think,_ “Yep, I’d dance to that in the disco”_, not much is so subconsciously, intuitively danceable that you’re halfway through the album before you even realise you’re engaged in some kind of slightly undignified chair-jive.

Still, it’s not like anyone was watching. And hell: it’s not as if the fact that I did so has in any way been placed upon an international medium of information dispersal for the whole world to see, is it now?