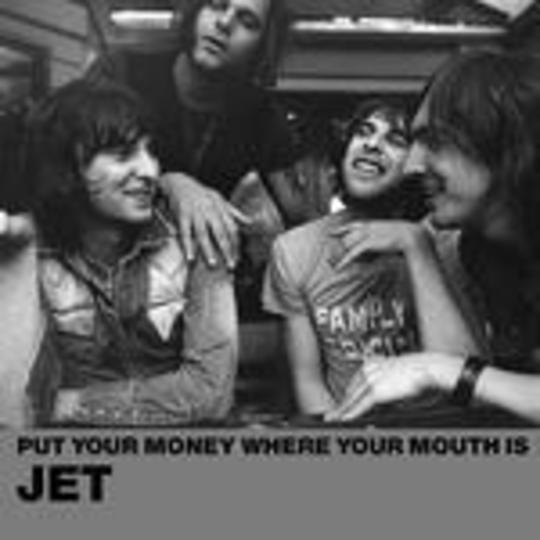 Oh for the love of all things worthwhile and consecrated, are you lot still here? Oh, and still wanting to ritually hollow out the carcass of Iggy Pop and parade the streets wearing the leathery beige skin as some sort of victory robe, it seems.

Yes, we know that it worked last time, that in a Dandy Warhols-like reversal of fortunes your tired pub-rock riffs were in the flick of a network-advertiser’s wrist turned into fodder for a million loutish pub crawls, club brawls and whatever the hell goes on after night falls in Carling-sponsored camping sites. But you’ve missed festival season, mobile phone companies use folk music nowadays and we all know what happens when cock-rockers try the same trick twice, don’t we? You bought the second Darkness album then? My point exactly.

Because ‘Put Your Money Where Your Mouth Is’ is essentially the same old from Jet, unfortunately. Okay, so there’s a bit where whichever Cester brother's singing tries to emulate a cod-falsetto in the vein of Curtis Mayfield, but fails so dramatically that he quickly falls back into the slightly more convincing Angus Young impression. Other than that it’s an exercise in stubbornness, a soulless glam stomp with a predictable guitar solo near the end and degrading lyrics involving the band slobbering over the thought of being “shown more” by a girl who’s like a “loaded gun” and all that sort of bollocks. If it wasn’t so spirit-destroying its blinkeredness could almost be amusing. Almost. (They even make hand-claps sound shite, and for any song to manage that is nigh-on unheard of.)

Dear Jet, it was fun and undoubtedly useful for a while using you as the shorthand for all that is embarrassingly unimaginative, obliviously clichéd, passion-devoid and downright god-awful in rock and roll, but please, we have Wolfmother for that now. Leave us alone.