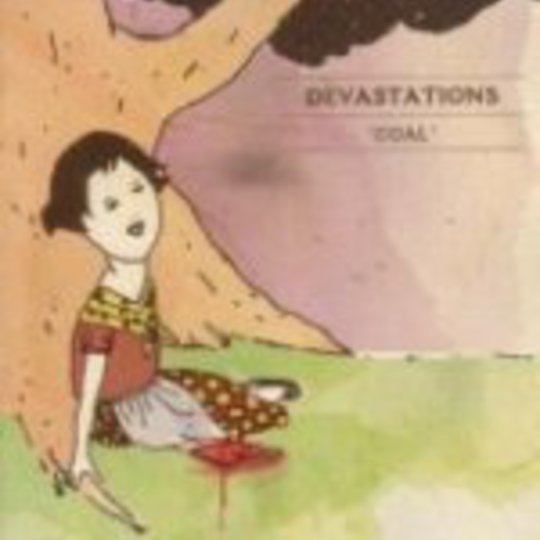 It's almost inescapable to acknowledge the similarities between Devastations and their fellow countryman Nick Cave. Conrad Standish lays his dark murmur over the majority of Coal, singing torch songs without torches, perfecting his drunken tightrope walk. But there are enough curiously ornate flourishes in Devastations' second album to give them their own space and personality, and to make Coal more than a grab-bag of soundalike castoffs.

Over a fruity programmed beat and twinkling organ, Standish booms deeply out of Coal's outset on 'Sex & Mayhem', then stretches lithely across strings, optigan and cooing female vocals. It's barely thirty seconds before you realise this is an album at midnight, filled with latenight introspection and empty glasses. The verses of 'The Night I Couldn't Stop Crying' house barely audible strums that lead you to a piano-laden kick of a chorus, provided by Tom Carlyon, whose organ and piano additions give Coal a hidden glow and optimism between its velvet folds.

Part Tindersticks, part Black Heart Procession, these opening moments are rich are welcoming; sombre without wallowing. 'I Don't Want To Lose You Tonight' demonstrates this deftly, with assistance from Clogs' Padma Newsome lending plaintive violin backing to Coal's most understated ballad. Bedrooms are boxing rings, fists have claws and lovers are fighters. The only issue arises when these sounds, these metaphors become a little too familiar - there are a million and one artists besides Cave touting this kind of deep-voiced, barstool roosting rock, brooding sweetly with a knowing charm, and all too often, Devastations mill languorously amongst them.

'Cormina' is one blurry and directionless lament of an example, featuring a minimal, wiry guitar and very little else. Closing track 'Dance With Me' suffers a similarly ambiguous fate, ending proceedings on a listless piano note. But, luckily, before we get there we're treated to the string-drenched 'Man of Fortune' (Bic Runga's vocals serving as a perfect counter to Standish's hushed growl) and the barelling 'Take You Home', a gothic cartwheeling feast of power chords and whistling organs that neatly shows off Devastations in their prime, and summarises why Coal - despite its shortcomings - is a polished and gently nuanced piece of work worthy of some of your time.