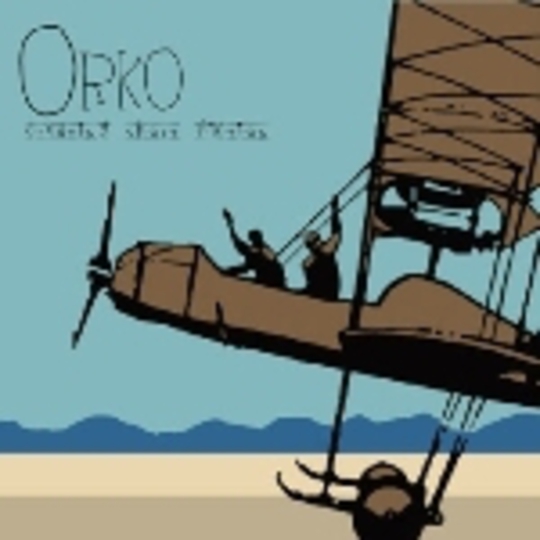 Dare I say it? May I pigeon-hole Orko as an ‘emo’ band? The term ‘emo’ is branded about far too often these days, but Orko really do seem to fit the description: they draw heavily from the indubitable godfathers of ‘emo’ (Far, Rival Schools) rather than peddle faux-emotion within a pop-punk backdrop. This is honestly crafted rock, following in the footsteps of other successful Brit-rock acts such as Hundred Reasons, Hell Is For Heroes and Biffy Clyro.

‘Across The Party’ – the album’s opener – is Orko’s statement of intent: to create soaring, evocative rock, driven equally by guitars and powerful vocals. It’s heavy, loud, and it sounds lovely. Electro-rock upstarts Union Of Knives were called in to produce Orko’s debut effort, and despite being one of the stangest pairings between band and producer/s you’ll hear all year, they manage to do a sterling job. Everything is mixed to perfection, especially with the guitars brought to the forefront of Orko’s sound - working best at times when guitarist David Mulholland’s riffs are at their most intricate.

Emotion and energy seeps out of every pore, at every given opportunity. The plethora of musical influences grows as the record proceeds as well – ‘Apres Midi’ goes as far as taking from atmospheric-rock types Explosions In The Sky, while certain tracks on the later half of Creating Short Fiction can be likened to punk mainstays Brand New. However, the accomplishment lies not in the list of influences drawn from, but rather the sheer skill of Orko’s songwriting. Heartfelt choruses sit happily beside strong instrumental buildings - and when brought together, Orko are unstoppable.

It’s the consistency that gives Creating Short Fiction the edge over Far’s lesser accolades, with only a couple of tracks falling short of the mark. Even ‘The Same And Everything The Same’, reminiscent of Sonic Youth’s ‘Providence’, works great in the context of the record. Tracks like ‘Drink Up And Get Out’ and ‘The Arguments’ are the reasons why Creating Short Fiction stands up as one of the most promising British records of this year, beating off the likes of their forefathers Hundred Reasons, who can be accused of feigning emotion in their last record. Creating Short Fiction is an exciting first chapter in what I hope will be a lengthy story.