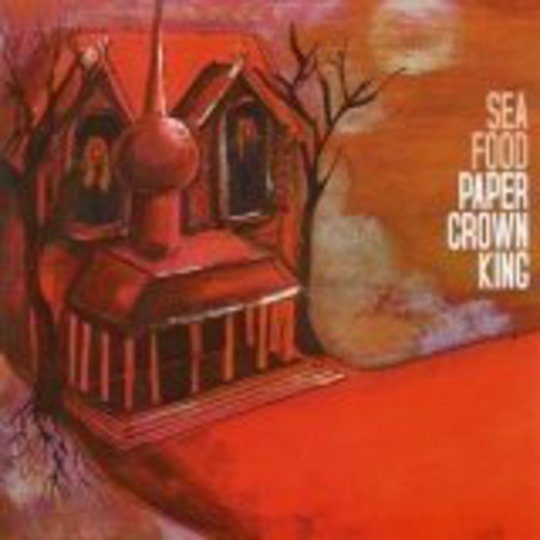 Had the cards fallen more conveniently for Seafood at the peak of their success, we may have ended up speaking about them in the same way we do Idlewild. Plucked from the London scene of the late Nineties by Fierce Panda and subsequently picked up by the big wigs at Infectious before a brilliant second album, their fortunes took a dive after vocalist David Line experienced serious lung problems. The band, now signed to Cooking Vinyl, couldn’t tour to promote their third album As The Cry Flows, and Seafood were all but forgotten in the down-time which followed. Until now, et cetera.

Despite their renewed desire to once more be recognised, fourth album Paper Crown King is not a comeback album. It cannot be described as 'Bigger, Better and More Determined', as these things often are; instead, it is narrower and more concentrated. Where As The Cry Flows was a widescreen listening experience featuring Hammonds, Wurlitzers, lap steel and mandolins played by a host of special guests, the new album is back-to-basics stuff: just the trio (plus recently departed bassist Kevin Hendrick) with a skeletal set-up of bass, guitars, drums and vocals.

Don’t expect this seemingly backward step to signal a return to their particularly loud indie-rock roots. Whether it’s the side effects of Line’s previous ill health or the natural passage of time, there’s not a single eye-bulging scream to be found on Paper Crown King, nor is there any of the urgency present in their early days. The resulting album could almost be seen as a compromise between the distortion-led days gone by and the relaxed feel of their last effort; a return to the rock-outs but with a newfound precision gained through experience, sounding almost automatic in places.

As a result, some might term Paper Crown King lazy, or the sign of a band low on ideas. Yes, we know the title track’s opening line of “Where’ve you been to for so long?” is so very close to that of ‘Led By Bison’, but locked beneath their redecorated exterior lurks the Seafood of old. ‘Little Pieces’ is a typical, ‘Splinter’-style three-minute pop gem, and when Caroline takes centre-stage for album closer ‘How You Gonna Live Without Me?’, it feels like a direct continuation of 2001's ‘In This Light Will You Fight Me?’. And then there’s the anthemic single ‘Signal Sparks’. To describe it (as some have) as their ‘Run’ would be careless – the dynamic is understated not epic, and there’s not a string section in sight – but as a token swooning slow number it excels, even though its vibe is not indicative of the album as a whole.

In terms of individual songs, little immediately grabs you about Paper Crown King. As with the previous album, it takes time to adjust to their new style, but when you warm to one song the rest quickly follow suit. Dismiss it at your peril, as this is Seafood you’re dealing with.

Rainbows In The Dark / Bad Education