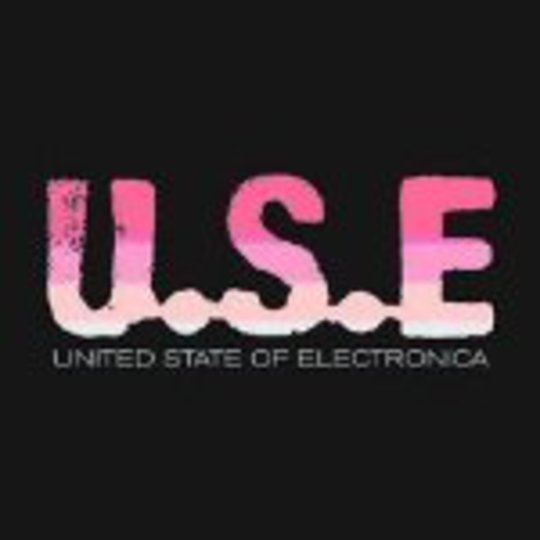 Where to start with United State of Electronica? Well, you know that nice whooshing sound you get on fancy new fawcets. They have them in nice hotel bathrooms and the like. Whoooosh they go.

Well that's what U.S.E sound like. Except instead of the fulfilling sound of well-pressured water it's the sound of vocoders and synths splashing all over disco-bashing guitars. It's a lot of fun is what it is.

Originally conceived as an imaginary electronica band from Mannheim, Germany, U.S.E - who count among their number four members of Wonderful (us, neither) - have become a real-life 42-limbed disco machine. Meta-pop, if you will.

The Seattleites gave their last album away on the internet, so their second album has obviously been designed to press certain buttons. In other words, the knob on the mixing desk that says 'Filleth Dancefloor' has been turned around to the proverbial 'one louder' position.

Using a vocoder on almost every lyric on the album does, however, make it sound like the band have listened to nothing but Daft Punk covering S Club 7's 'Don't Stop Movin'', and the lyrics are a fine mix of innuendo and space-filling nonsense. But that's not the point: this is designed to make you trot. No more and definitely no less.

And, as if to make it clear to those lacking basic functions (such as hearing), they let us know that They Like Disco by breaking into an impromptu version of ‘Oops Upside Your Head’ on ‘There's Always Music’.

Anyway, despite single and album-opener 'It Is On!' sounding, on first listen, like someone has emptied the contents of Van McCoy's stomach circa-1975 into a recording studio, it works. Hipster-disco comes alive. It's an outrageously camp, carnival of an album that makes Scissor Sisters sound like Leonard Cohen when he’s forgotten his Prozac prescription.

Stuffy & The Fuses, The Aprons

The Ties That Bind Us