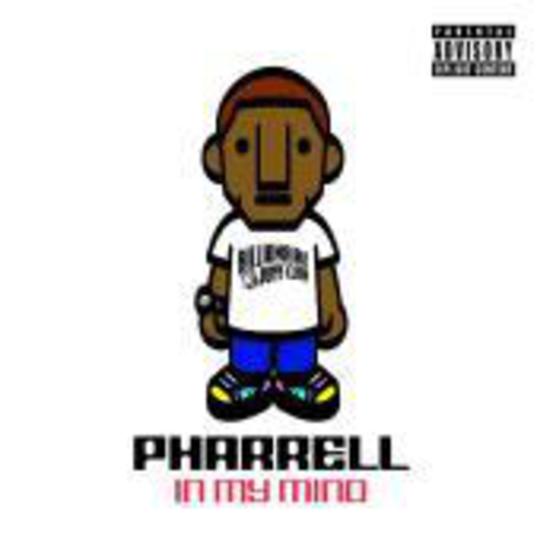 Just how does Pharrell Williams picture himself, in his mind?

Is he a bone fide Casanova, gold-plated with diamonds sunken into his cuffs and collar, all but ready to penetrate each and every girl of a million male fantasies with an appendage only comparable size-wise to a World War II battleship? Is he an all-action, skate-boarding streetwise kid, rocking his baggy shorts and supping malt liquor alongside his brothers on the block with scant regard for the pressures the man yearns to apply to his existence? Is he a musical maverick whose debut album is just another step towards some hip-hop pantheon in the sky, where he’ll reside with Tupac and friends once his all-conquering Startrax empire has colonised each and every city with a FM radio station via infectious skitter-beats and strangely affecting/annoying (depending on atmospheric pressure) falsettos?

In My Mind is, perhaps, appropriately titled: lyrically, Williams plays out his wildest fantasies, allowing his ego to inflate to a previously unrealised proportions. On occasions – such as ‘Take It Off (Dim The Lights)’ (no explanations needed there, conceptually, surely) and the Nelly-featuring ‘Baby’ – Williams’ self-congratulatory rhymes retelling tales of sexual conquests are simply laughable. Granted, it’s not exactly unheard of for this multiple-guest-starring record’s central protagonist to blow his own trumpet – literally, if he could, one imagines – with no little regularity, but opening an album with a song featuring the line “She like the way my hands use her body for hand warmers” is, quite honestly, ridiculous. The graphic imagery across this record is completely at odds with its target demographic of TMF viewers and former readers of Smash Hits; almost every minute packs a line of absolute filth.

The production, though, is never less than see-your-own-face-in-it slick, oily and rich; the beats come slight and fast as often as they're sludgy and deep, shooting like darts beside your ears, vocal “Whoos” chirping and bleating under rumbling basslines like ghostly voices murmuring from the other side of the looking glass Williams so obviously spends a great deal of his spare time standing before (really, the booklet folds out into a Pharrell poster – just how full of himself is this guy?). The best tracks – ‘How Does It Feel?’ for example – prioritise beats ‘n’ pieces over tumbling raps and often-needless guest slurs. Sadly, they’re hardly in abundance.

Of the album’s many guests, few make any significant impression due to Williams’ consistent spotlight-hogging (fair enough – it is his record). Kanye West’s turn on ‘Number One’ is decent enough, his few lines executed with such customary confidence that one can overlook him referring to himself as “The Louis Vuitton Don”; Gwen Stefani, meanwhile, has never sounded dirtier than she does on ‘Can I Have It Like That’, which is a good thing however you read it. Nelly and Snoop Doog, though, are wasted on material that never allows them to establish a presence. Of course, you could consider that a blessed relief.

A few highlights aside, it’s hard to understand why at least a half-dozen of these over-glossed R&B-lite numbers ever made it out of their maker’s mind – the creativity, the uniqueness, that Williams was previously praised for is conspicuous by its absence for the most part, and when he squeals the remarkably awful line “She’s got an ass like loaf of bread/you wanna slice”, well… Any self-respecting human being should just reach for the eject button, never to allow this stodgy vanity collection of compositionally dissatisfying tunes to grace their speakers again. Those radio hits we can tolerate every few hours or so, but over an hour of substandard sound-alike efforts? No thank you.

Not that Williams will care about such an opinion: he’s probably bathing in a tub of breast milk right now, eating grapes from the palms of lithely nubile nudes while a harpist re-works his back catalogue into quasi-classical arrangements never to be heard outside of whatever mansion’s taken his fancy this month. In his mind, anyway.

The Kids At The Club (An Indiepop Compilation)