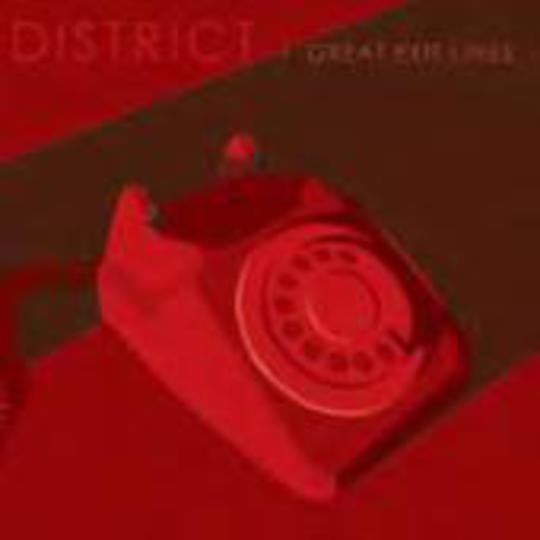 Author note: Hi! This, as you may be aware, is a review. It's a review of a band called District and their debut album_ Great Exit Lines._ Throughout, I will pertain to this being a highly competent 'emo' record - an album of high-octane riffs and inane chants - and I may, _may_, give it a seven out of ten score. If this is going to bother you, I recommend you click away now. I don't want to sound excessive, but really - emo's about as easy to sell as a Jeremy Clarkson stool sample and we need a focused readership...

_Great Exit Lines_ has dual riffs. It has but one pace. It has inane, impassioned vocals. Yes, throughout the album you'll very rarely think to yourself, _"I had no idea this song would do that"_, but while many records would be simply cave in under such immense inanity, **District** actually pull it off.

If, perhaps, they confined themselves to the current form of emo, this wouldn't be the case - instead of aiming to please the current buyers of emotional rock, they resemble a more angst-ridden Mono, their particular dual guitars more heavy than your average. But far from the older, perhaps 'proper', emo, the vocals are wholly modern - falsetto rises on _'Flames in the Back Row'_ and a valiant attempt at belly growling on _'Great Exit Lines'_ keep District firmly in the here and now.

Essentially, however, where the albums succeeds is that it gnaws off only as much as it feasibly can from the spit of musical endeavour. This record, in no uncertain terms, will not change your life. It might not make many of you even blink, but at this exact second in time District's singular approach of big guitars and bigger vocals clicks and does so defiantly - _'Air'_ could so quickly have become a trek, but the brisk tempo seems to skim the album's faults, indicative of the album whole.

By no means heavy and by no means innocent, _Great Exit Lines_ has an undeniable charm. Sadly, though, this middle ground they find themselves populating will probably find them alienated between the two posts of emo prejudice. I'll allow myself a slight "aww" for their predicament.

_Author note: Hi! I'm the reviewer of the above piece. Please avoid property defacing and just abuse me below..._
Log-in to rate this record out of 10
Share on
Love DiS? Become a Patron of the site here »