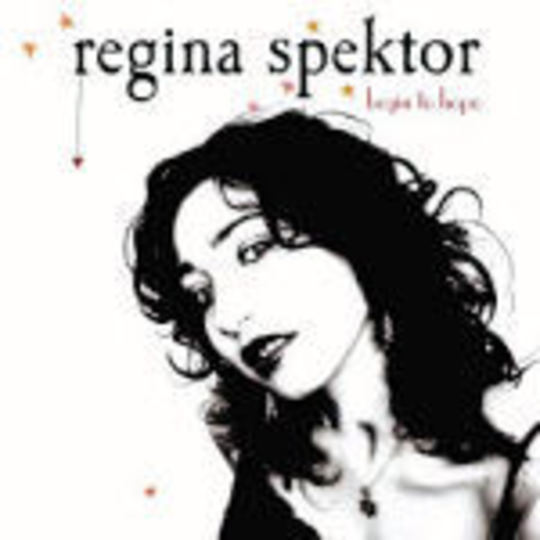 On the first few listens, even the makers of her shrines could be heard whispering, to themselves at first, "Honey hips, what have you done?" You could sense the trajectory of a tragedy, which spread right from the day dot, as the first track appeared on reginaspektor.com. There were, however, a minority, who got it and started talking about how amazing it'd be if their Ruskie princess became a fun pop-cult act, like Annie or Liz Phair, with proper musical kudos.

As the weeks passed and the album sneaked out, the message board threads began to contain a few martyrs exclaiming joy amongst the hordes of discontent. The greatness of this record is most clear on the skippity song about "orca whales", 'Hotel Song', where the quaint daydreams are less like childish fridge-hung scribbles of fairies but proper drawings in frames above a mantel piece. Quite simply, Regina has given us a clue in the title and essentially wiped away her smirk of cypticism and the randomness, plus she's got rid of the hiccupping squawks.

The results of her indie-ghetto escape are as much a voyage as anything she's done before, but this time there's some serious abuse of modern production. There's still 'gina spreading her talk of falling in love with mythical beasts and her NYC street-dreaming, though, and even some fearing of old people - "they'll inherit your soul". She's very much still got 'it'.

It's when the thundering pianos build during 'Apres Moi' and when the drums finally kick in that you can't begrudge her for wanting to stop hiding behind nervous gentleness. Then there's the Strokes-baiting, Moldy Peaches-ish rush of rumbling bass silliness that is 'That Time' - it's another journey through New York's Delancey, through clubs full of dumb drug deaths and other less deadly obsessive tendencies. Then there's the Parisian-purr of 'Lady', as the album progresses and the production is stripped further and further back.

This feels like Regina at her most Regina - Begin To Hope is a record that could fit into some scummy boho venue cranking out Guns N' Roses as easily as it could the grandest concert hall of St. Petersburg. If the elitist few who hold Regina almost too close to their bosom can get past the shiny façade of the first few tracks, they'll find a whole new Regina to love. For the rest of us this is our chance to 'get' what the obsessives are on about without the ooompa-RAH-RARRGH moments of strangeness which put the world off previously realising 'Us' was the ballad for our generation.

Leave Before The Lights Come On