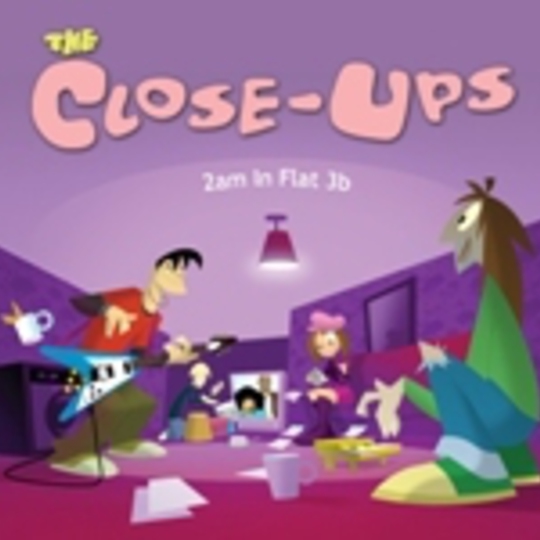 Cartoon pop stars - maybe they're the future after all. Oh how we laughed when Jamie Hewlett and Damon Albarn launched their über-pretentious creations set to a hip-hop backbeat upon us. Certainly no one would have expected other budding artists to follow suit, and least of all a band whose music could quite easily be defined in any dictionary as the ultimate meaning of the word 'twee'.

Make no mistake about it, The Close-Ups might be a 21st Century creation but they inhabit a parallel universe - that of one-time Talulah Gosh and Heavenly chanteuse Amelia Fletcher, aka the girl whose voice launched a thousand helium schoolgirl soundalikes around the turn of the 1990s.

Essentially a two-piece - Carl Green (aka 'Rake') and Abby Connor (aka 'Abby Kirkella') - plus numerous friends and accomplices at what seems like the quietest house party ever, The Close-Ups may exist in a cartoon world but their kingdom isn't exactly blessed with fairytales, milk and honey. Instead, it's a pastel-shaded, slightly more technicolor place than your Average Joe's humdrum existence, as the majority of the songs on 2am In Flat 3b are a testament to.

Amongst the fourteen songs on here you get tales of sexual harrassment at work ('Kidnap The Boss'), lesbian lust ('Jean Shrimpton', 'Dress Code') and odes to dead-end towns ('I'm On My Way', 'Felt Pen'). Add to these the ultimate list song 'Come On Home', probably the only time you're likely to hear the names of Louis Theroux, Betty Boo and Norris Cole in the same three minutes of music, and you've got an album that just about rides the edges between bitterness and niceties in one fell swoop.

Persevere with Connor's infantile vocal and you've actually got the most austere soundtrack to your own life you're ever likely to hear. Add your own animation and bingo - nine-to-five drudgery suddenly becomes as panoramic as a rainbow. Lush.