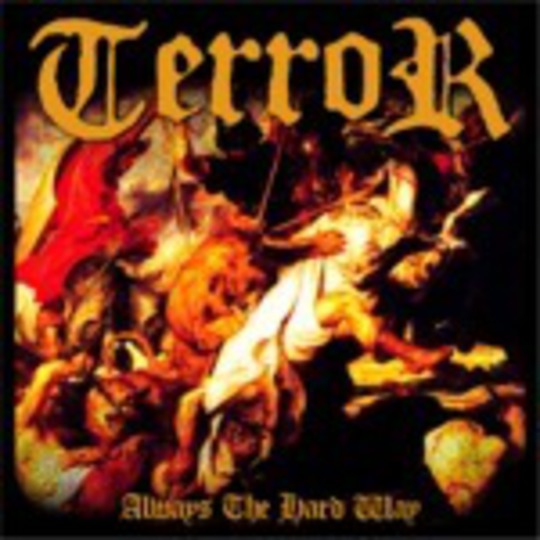 Know this now: the label ‘hardcore’ does not do *Terror *justice. Scott Vogel is possibly the angriest and liveliest frontman you will ever bear witness to.

His mission, after moving from Buffalo, New York, to find a troupe of like-minded individuals in Los Angeles to form these aptly-named noise merchants, has succeeded. _Always The Hard Way _is angry from the off and does not want to give an inch. You will not find any solace in this record.

Produced by Zeuss (Hatebreed, Throwdown) the record has some elements of the currently popular metalcore movement, such as intricate guitarwork, rapid-fire drumming and bass-heavy breakdowns, but is obviously much closer to the work of Hatebreed than that of Killswitch Engage.

However, instead of sounding like the next step onward and upward from their last album One With The Underdogs, _ATHW _is a welcome marked regression back to Terror's roots. Vogel’s vocals are back to being as angry as they were in the band's early material but have, naturally, become stronger and even more effective. The result is some of the best hardcore vocals you will have heard in a long time.

The difficulty with going back to basics with an album is that while you can write and perform the kind of songs you wish you could have five years ago, it does sound slightly old and slightly clichéd. ‘You Can’t Break Me’ _and _‘All For Revenge’, for instance are overwhelming in their fist-pumping attitude but you know you’ve heard it all before and that you’ll hear it all again in the not-too-distant future.

The unexpected, minute-long hip-hop interlude from MC Murs and Mr Dibbs, amazingly titled ‘Dibbs And Murs Check In’, breaks up the simple, punishing onslaught of hardcore madness that Terror provide. Despite the stellar performances on the record, there’s just not enough breadth to mark this blinkered aural assault out from the rest of the pack.