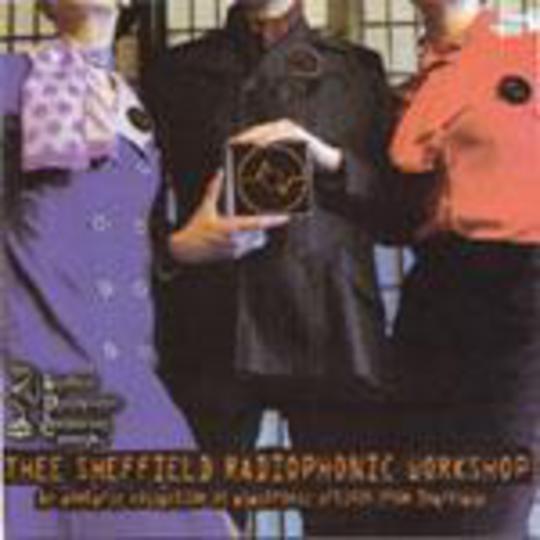 Driven by a love of “wibbly-wobbly noises” and a general commitment to putting out good new music wherever they might find it, the noble institution of Thee Sheffield Phonographic Corporation have turned their collective eye on electronic music. This diversion from guitar-based noise has resulted in Thee Sheffield Radiophonic Workshop, an 11-track, ten band compilation billed as “an esoteric collection of electronic artists from Sheffield”. And esoteric it certainly is: ranging from obtuse and surreal soundscapes through cheesy synth pop to sexy electro-rock leers, Thee SRW provides something for anyone with an interest in “the passage of electrons through printed circuit and silicon chip”.

Opener ‘Ladies Love Long Arms’, courtesy of solo artist Kings Have Long Arms, is possessed of a bass line which will stick in your head FOREVER, over which pulse a variety of squelching bleeps and feedback noises and a strikingly venomous vocal. An anti-romantic, metaphor-based dissection of human interaction (“You could clean my carburettor/While I check your underneath”), its air of casual menace is disconcertingly compulsive. Keeping up the romantic metaphor theme are The Lovers** with ‘La Degustation’, a hilarious extended foreplay of a number in which a not-quite-gentleman attempts to persuade a young lady to “Come drink my wine” over a bedroom background of low-impact bass grooves.

Moving on to the rather more electro-heavy (and less bedroom-focused) we have Conrad, here persuaded into their first re-release since they fell silent twenty years ago. A dark, epic number consisting of piano overlaid with fuzzy noises, strings and a remarkably low vocal line, its sweeping melancholy is slightly 80s-ish, only with Proper, Affecting Grandeur. More high-speed are heartyeah. Belying their somewhat sappy name, they start with pulsing beats before bringing in reverberating guitar and a punchy, thrashpunk vocal which fits and starts over an ever-evolving selection of electro squalling, coming to rest on a melancholy refrain of “You make a good boy/I make a better girl”. Darren Chuck (of, unsurprisingly, Sheffield band Chuck) mixes a rocking drumbeat with a stomping tune, hard-edged fuzzing noises and a machine-gun vocal jeering ‘You Think You’re So Cool’, making for an intelligently dumb electronic sneer.

In ‘Medieval Hairdo’ The Pony Harvest provide the least conventional track on here – and one which is also a stroke of sheer genius: a high-speed number of soaring vocal samples overlaid with arcade-fire bleeps and the occasional neighing horse which sounds like an alien invasion in a monastery. The Box Set’s first contribution, ‘Zoshchenko’, veers between aggressive fuzzing beats and dancefloor synths as a spoken-word vocal rambles about living on the 15th floor and using more cables than Kraftwerk; the whole adding up to something both aggressive and very danceable: edgy, militant disco brilliance. Their next track, ‘49-second climax’, is quite literally 49 seconds long and consists of strange, tranced-out synths topped with frantic beats.

That leads quite nicely into Thee SRW’s compilation-ending title track, which starts off as a trance before evolving gradually more complex beats, bleepings and samples as the vocal lists the Thee SRW’s broadcast range in a manner which becomes part of the soundscape. A subtly enjoyable ending to a quite remarkable compilation: if you like electro music, I strongly advise paying Thee Sheffield Radiophonic Workshop a visit.