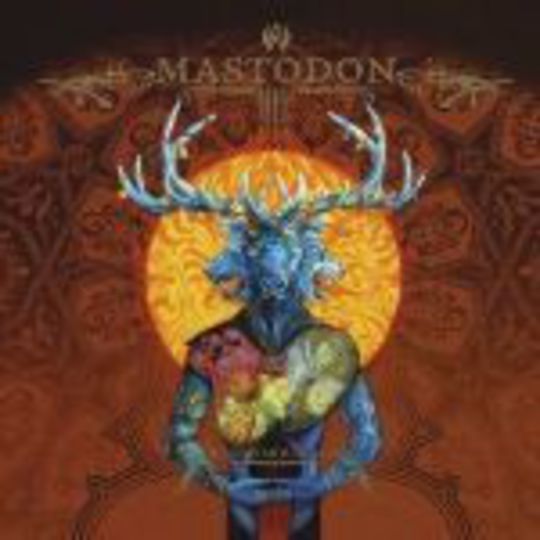 Although it arrives in UK stores on the same day as another technically accomplished rock band’s latest effort, it’s almost certain that Mastodon’s Blood Mountain won’t generate the same level of interest beyond the rock-focused press as The Mars Volta’s Amputechture.

Each represents their makers’ third long-player proper, and both are on-paper behemoths of riff-wizardry and otherworldly drumming. Yet one is likely to be relegated to only slight mentions in the cover-all-bases music press while the other enjoys five-out-of-five appraisals and sycophantic summaries praising over-long guitar solos like they’re wholly revolutionary building blocks of modern rock.

Something about that is _so_ wrong.

Granted, I’ve not put the above theory to the test – I’m yet to compile a scrapbook of clippings and count which act has enjoyed the greater coverage – but my gut tells me that the majority of allegedly open-minded music critics, those whose words appear in broadsheet supplements and magazines at the more intellectual end of the music press spectrum, will view one record as the work of influential and inspirational individuals and the other as a metal album and nothing more. Metal’s for kids, you see, and lankily-haired men in leather trousers and patch-covered jackets that refuse to grow up and toss away their Megadeth LPs.

Only it’s not, at all, not that it really matters: Blood Mountain, you see, isn’t just a metal record. It’s so much more. Its complexities comprehensively out-punch those of Amputechture, while its concentrated brutality leaves the listener dizzied and desperate for more. It’s the record that’s truly the work of influential and inspirational individuals, while its column-inches rival is a simple coagulation of a myriad of disparate styles into an unwieldy, confusing, horrendously glutinous blob. That Amputechture has been deemed brilliant in certain sections of the press leads me to suspect one of two things:

One: the maximum-score reviewer in question spent so long listening to its over-the-top riffs, repeated almost ad infinitum, that they simply had no time left in their hectic day to even give Blood Mountain half-an-hour’s attention; or…

Two: the maximum-score reviewer in question subscribed to the narrow-minded opinion of metal outlined above and didn’t so much as tear the ‘By opening this seal you are agreeing to the terms below’ strip from the promotional copy of_ Blood Mountain_ they received.

Blood Mountain begins with a bridging effort, ‘The Wolf Is Loose’, which neatly introduces fans of the Atlanta-based quartet’s previous long-player, Leviathan, to the far-superior compositions to come. Stylistically the most archaic-sounding song on this twelve-tracker, the curtain-raiser plunders the same sunken treasure chests of sparkling riffs that served 2004’s breakthrough effort so well. Lyrically, too, the song harks back to past achievements: references to “the belly of the whale” can’t help but coax a longing to revisit the Moby Dick-influenced Leviathan. Much like its forerunner, Blood Mountain is a concept piece; drummer Brann Dailor, who deserves every plaudit possible for his performances here, has said:

“It's about climbing up a mountain and the different things that can happen to you when you're stranded on a mountain, in the woods, and you're lost. You're starving, hallucinating, running into strange creatures. You're being hunted. It's about that whole struggle.”

Blood Mountain continues the elemental themes present in the four-piece’s previous work, too – where Leviathan was the ‘water’ record, this is the band’s ‘earth’ album. Debut Remission is said to be the band’s ‘fire’ long-player, since you asked.

At this point it’s prudent to observe that ‘The Wolf Is Loose’ also features the finest percussive introduction to a song –_ to an album_ – since High On Fire’s ‘Devilution’. It gives the listener an immediate injection of adrenaline, preparing them for the envelope-pushing endeavours to follow.

‘Crystal Skull’ again brings Dailor’s astounding drumming to the fore: it’s hardly surprising that he’s listed above his band mates in the record’s credits. Percussively head, shoulders, knees and toes above any effort from an alleged peer, Blood Mountain is a sticksman’s wildest fantasy made real: slip on headphones and the beats surround you like a pincer movement, allowing the album’s twisting and turning and tumbling riffs to mount a full-frontal assault; listen to it through speakers of a decent size and expect to experience a sweetly stinging ringing in your ears for the foreseeable future, primarily because as soon as its parting shot, ‘Pendulous Skin’, wheezes its way to an organ-and-synthesizer peppered end, all you want to do is go around again.

On the fifth or sixth listen, individual arrangements begin to standout – that said, there’s no dipping of quality from start to finish. ‘Capillarian Crest’, the album’s lead single (reviewed here), is roughly a dozen songs in one, a multi-faceted and continually-churning monster that refuses to let up its ferocity despite its frequent shifts in style. Riffs come_ chugga-chugga-crunching_ from the speakers one moment, only to be reined in for the sort of delicate-yet-mesmerising intricacies one associated with The Mars Volta a couple of albums ago.

Instrumental offering ‘Bladecatcher’ continues this beguilingly complex approach to song craft: a twiddled opening twenty seconds, reminiscent even of something Joan Of Arc might’ve penned around the turn of the millennium, collapses under the weight of one of the album’s most breathtaking passages of polyrhythmic riffing, supplemented by chaotic are-they-human-born? bursts of terrifying noise.

Either side of this vocal-free middle section, arrangements lean towards prog-rock territories with their makers forever bearing a wicked glint in their eyes. Dailor’s always-impressive work at the kit – he’s more than a match for the most talented of jazz drummers – is equalled for entertainment value by Brent Hind’s primal roars and wonderfully mystical and quite-probably symbolic lyrics. At times the tales relayed by certain tracks read like a Dungeons & Dragons adventure gone horrifically wrong, but even the greatest bemoaner of anything considered ‘geeky’ will find a selection of lines endearingly amusing. For all their technical accomplishment, instrumentally, the lyrics of Blood Mountain suggest that Mastodon aren’t taking themselves absolutely seriously just yet. They’re all the more appealing for such an attitude, too.

An album that leaves its closest on-the-shelves cousin, the aforementioned latest from Omar and Cedric and company, languishing a thousand leagues in its wake, Blood Mountain is, almost unequivocally, the greatest rock album this year will give birth to. Ingeniously complex yet satisfyingly direct and immediate, meticulously crafted yet wholly organic in feel and flow, this triumphant third LP from a band that successfully avoids precise pigeonholing is absolutely deserving of a maximum numerical score – there’s simply no other possible conclusion to reach.

If you’ve any interest, whatsoever, in rock music in any of its subgenre forms, you need to afford Blood Mountain some considerable attention. Even if you’ve regarded something categorised as metal on paper in the past as not for you, elements of this long-player are sure to positively blindside you. Open your narrow mind and you will rock out for an hour or so.

Everything about this is _so_ right. Ten out of ten.