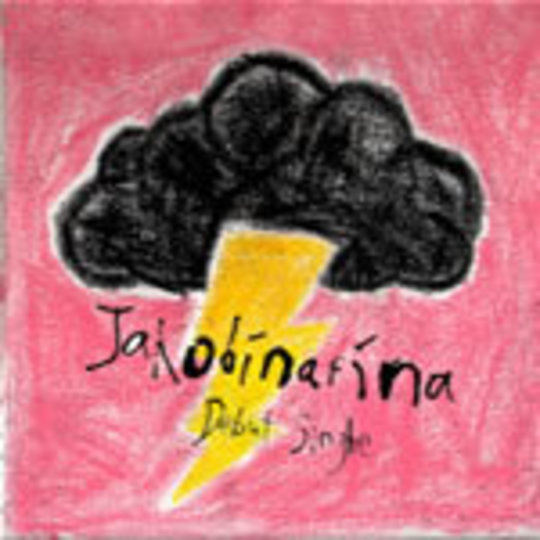 In my mind, I see a well. In this deep, dark well, piled one on top of the other, are the bands that seem to exist with the sole purpose of slagging other bands off. It’s cramped and oppressive, it’s bordering on illegal, and Johnny Borrell’s foot is lodged in Brandon Flowers’ nether regions. Covering their exit: a large slab of rock seating the collective beings of **Jakobinarina**…

…who are not only there because their 6 members are heavier than the average band, but because after 23 listens to this, their debut single, I’m quite certain it will overshadow, nay, _demolish_, any output from the current crop of Kooks, Killers and Kasabians because while these bands seem to think punk is what you say to the press instead of the music you create, Jakobinarina are rooted firmly in the genre’s original ethos: play fast, loud, and leave before anyone can catch their breath.

Sonically, the atypical icy accuracy borne from indie-pop gives the single an extra dimension, saving it from becoming a retread of previous punk, but it’s lyrically that Jakobinarina go from creating a well-produced assault to a true statement of intent. Lead singer Gunnar Ragnarsson on _‘Nice Guys Don’t Play Good Music’_ howls, _“People is the synonym to all my problems/heroes who’ve never done any good deed in this world at all,”_ and it’s like Mark E. Smith before he hit the minimum drinking age.

_‘His Lyrics Are Disastrous’_ will be the most astute account of anyone’s teens you’ll hear this year, _“Le-e-ea-e-eave this island for good”_ chants Ragnarsson. Yeah, they’re from Iceland, but pissed off and pubescent will sound the same from anywhere. And then there’s _‘Power To The Lonely’_, the band’s triumphant sing-a-long, the final gusto of guitar lines as if to say it’s by no means the last you’ll hear of them.

So I’ll say this to you, magazine cover band, the bar has been raised by Jakobinarina far above your abnormally large heads. They’re young, they’re Icelandic and by golly, if this doesn’t alert many to your sycophantic garbage, nothing will.