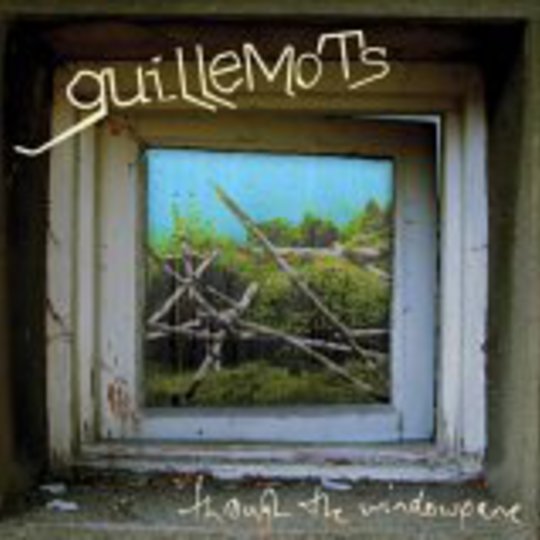 Just think of it: the very best scenes that were never made, from the very best movies that were never conceptualized. Those critical turning point moments, the headiest cocktails of regrets, uncertainties, thrills, throes of despair. Despite these concepts having never progressed past the mind of the unconscious dreamer; past the hands of the unartistic finance director refusing necessary billion-pound budget; muted by the statically fake acting, Guillemots conjure them from thin air - no pictures, limited dialogue but enough sound to create a whole world, worthy of a cinema screen.

You must understand - this album is not concerned with minimalism, understatement, earthiness or roots. Through the Windowpane maximizes and intensifies every moment, every muttered word and every touch of emotion. To criticize Guillemots for being overblown would be missing the central point of the record. The movie industry trades in the way that each critical emotion is taken to an extreme -

wallowing in the pits of despair can quickly dissipate into such joy that causes the protagonist to float right off into the sky in a puff of rainbow-brite glitter soaked air.

'Blue Would Still Be Blue' fits the depths of despair scenario - a lone voice and keyboard arrangement still managing to be florid with philosophy; fear of death, fear of living - "I waste so much time / thinking about time / I should be out there claiming what's mine". 'We're Here' is the unabashed celebration of incredible optimism - endless string crescendos leading a dance of dizzy circles, Marilyn Monroe spinning her fluted white dress, staring into a cobalt blue sky. When Fyfe sings, "the world is our carpet now, the world is our dancefloor now", it's impossible to see anything but visions of every golden-age Metro-Goldwyn-Mayer climax - National Velvet heading over the race finish line, blonde-permed girls spinning umbrellas in the rain, ridiculous joy and technicolour fantasy.

Emotion is never black and white - this record has more depth than just joy versus despair. The most interesting scenarios are where sadness and regret compete with future hopes, where the uncertainty of what life brings next causes fear and excitement. 'Redwings' combines the sorrow of leaving a best friend - "just for the hell of it / just for the sake of it / How much I loved you" - and all of the sentimentality of Simon and Garfunkel's 'Bookend's Theme', with the elation of new adventures and journey in life - the tug of war between past and future orchestrated.

You must understand - life is what you make of it, you choose what you perceive. Should you want to, each doorway you pass through could be your entrance into new worlds. Through the Windowpane is a most fitting title for an album that takes songs into imaginary locations - worlds filled with all the surrealism of Alice's Wonderland, journeys as story-filled as Dorothy's red-brick road. It's no coincidence that the opening minutes of the album are stylistically akin to Dvorak's 'New World' symphony, cradling both warmth and aching contemplation. Good songs build rooms in time - you might like your gritty punk band to roll around in their own painful shit, but that's no more 'real' than Guillemots creating landscapes of magnified intensity and brilliance with music.

I continue to claw for a modern reference point to convey how far-reaching in sonics and story-telling this album is, but there are no contemporaries I can point to without doing a disservice to the band. Instead, I think of Elton John singing over Leonard Bernstein's West Side Story soundtrack; crystal-clear melodies and dramatic orchestral passages. The final track, 'Sao Paulo', is the most dramatic closing tracks you'll hear this year - the calls of a blues trumpeter in a nighttime street, dark rain in a unwelcoming city, horns sounding as alarms and behemothic rhythmic breakdowns.

Whether or not you will be swept away in the dreams and despairs of this album depends on your temperament - you could easily sit down, all stoic and profess that they are nothing more than a memorable singles band; you could deny all of the stormy depths that swarm beneath songs. Perhaps you just don't want to let music break your heart - I've sat weeping like a snotty-nosed Bridget Jones over these cinematic tales; I've thrown my arms up into the air and let my heartbeats race with possibility and hope. This is not convenient music to listen to, but neither is it difficult - Guillemots' audience will not be decided by age or style but rather by whether they want to step through the windowpane; whether they want to involve themselves with an overblown, over-the-top world of orchestras and golden-age cinema story telling.