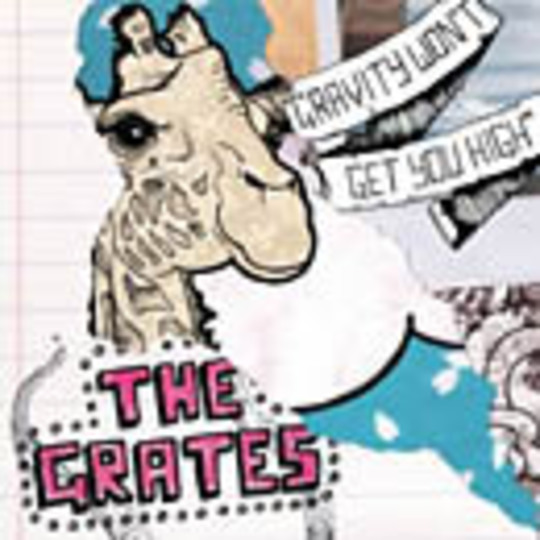 Rarely does a summer go by without those damn irritating Aussies causing us in unison to cry "Damn! Those irritating Aussies...". Be it cricket related, tarmac smelling lager fuelled or even Harry Kewell's missus' fault (yeah I know she's English but...?), there's always something about the natives of the land down under that raises the hackles on an Englishman's back.

So it is with great (dis?)pleasure that I welcome Melbourne's The Grates to the club. But before anyone calls in the xenophobic state police to arrest, try and burn me at the kangaroo dung infested stake of Shane Warne, their irritant streak won't shred the nerves, impale one's head or cause mass palputations of a disturbing nature.

Instead the only irritation that can be levelled at this trio and their first long player, Gravity Won't Get You High, is one of insatiable catchiness to the point of terminal infection.

Sure, there's only so much you can do with a traditional guitar, drums and vocals combo, and most of that has been done already, but ignore the lazy "Yeah Yeah Yeahs rip-offs" tag that The Grates seem to have been saddled with from their conception and you'll actually find a record that concocts punk, soul, country, funk, pop...oh just about every genre going in fact apart from disco and well, why would you need that anyway? into a 40 minute, 14 song frenzy that's shamelessly shambolic but all the more charming for it.

Sure there are moments where Patience Hodgson sounds like Karen O's excitable twin sister but there are also parts of the record that show an incandescent sweetness ('Sukkafish') or an innocent charm ("Lies are much more fun!" - err, 'Lies') that ultimately suggests by about 2020, when they're in their late thirties and on album number 15, they may have just grown up, not that we should care, because adolescence rules and 'Gravity Won't Get You High' epitomise everything about its state of being, even if its' creators are quite possibly the oldest ones in the book.