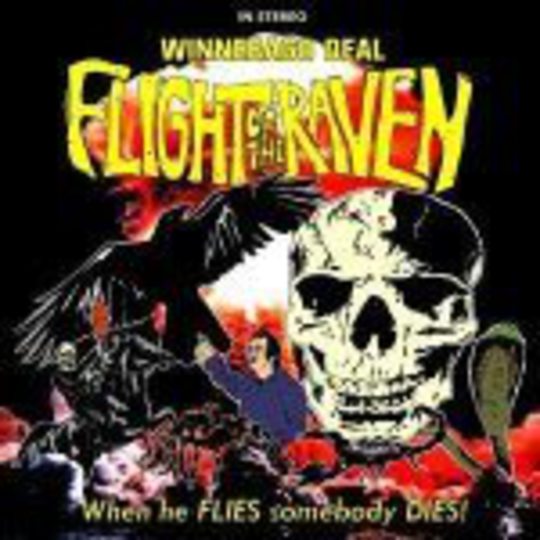 *Winnebago Deal *have always point-blank refused to fit in. The duo have always spurned any notion of being part of any UK scene and instead have snuggled up to the DC hardcore and Seattle grunge scenes much more readily.

You’ll be pleased to know that they’re back with _Flight Of The Raven _and they’re as angry as ever, except they’ve refined their sound and written real songs. Their latest development has come after touring with Brant Bjork and then having the dubious honour of being Nick Oliveri’s backing band, Mondo Generator, for the past year.

Coming across like a wonderful reconstitution of The Bronx and Kyuss into one almighty rock behemoth, the duo are now so covered in sand, they’re almost part of the Desert scene.

Despite this, album opener _‘With Friends Like These’ _has the classic Winnebago Deal sound about it – balls to the floor, all out speedrock. You get that stoner feeling soon after though. _‘Reeper’ _is a two-minute homage to Germany’s premiere red light district found in Hamburg. Ben Perrier’s guitar work is more precise than ever before and he backs this up with a welcome QotSA-esque intrusion from a piano while he howls his bitter tales of woe over the top.

More tales of sad affliction are found in the frustration-fuelled ‘Fresco’ _and the more languid _‘Czechoslovakia’. There is a frightening sense of anger and resentment coursing through the latter song that not even *Nick Oliveri *can build upon with his cameo screams.

In a radical departure from their perma-angry state into a more reflective, almost contemplative mood, _‘Going Home’ _is a seven-minute stoner extravaganza. Inspired by a funeral procession in Wales after being on the road for an excessively long period, the near-apocalyptic lyrical content is complemented by a full and massive sound consisting of rolling riffs, theremins and, even more incredibly, a bass guitar, all peppered by the regular yearning howls. While it does threaten to border on the self-indulgent at times, a blind eye can always be turned in such marvellous exceptions as these.

Producer *Jack Endino *joins the band on the pounding title track with delicious slide guitar that lends a further element of the QotSA sound to proceedings. However, the beauty lies in the way that they follow this with more head-down, as-heavy-as-it-is-fast garage rock. It’s the perfect combination.

It’s because you know there’s another song just around the corner that will be just what Winnebago Deal have always done but they’ll be doing it better than before with a real progression and development of sound. Sure, _‘Targets’ _is another no-brainer rock-out about shooting stuff that they could have been playing three years ago for all you know but there’s those ivories tinkling away again, hard and fast, adding a new and appreciated dimension to their music.

And then they finish the album with an exceptional rendition of Black Flag’s _‘Revenge’ _with Nick Oliveri shrieking the lead vocals. _Flight Of The Raven _is the album that they will look back on and be the proudest of when their career is done.

Hopefully their future progress will not be hindered following the end of their Mondo Generator days after their fractious relationship with Oliveri came to an unsavoury head in June. It would be a shame because while they have surely created their ten out of motherfcking ten, magnum opus at the third attempt, even more is expected from *Winnebago Deal **in the future.