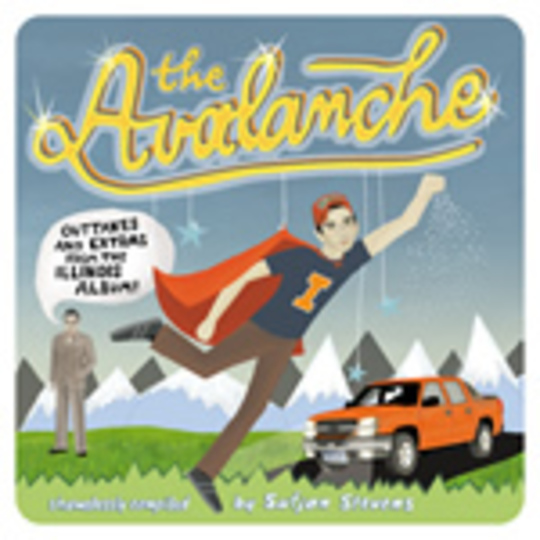 Not to be misinterpreted as an album ‘proper’ – at 21 tracks and 76 minutes, The Avalanche looks as much like a compilation affair on paper as it sounds through speakers – Sufjan Stevens’ follow-up to the all-conquering Illinois long-player is nevertheless a welcome and recommended stop-gap release. Essentially disc two of said State-themed effort, this is perhaps wrongly presented as outtakes: there are few songs that couldn’t have slipped between Illinois songs, leading one to conclude that the only reason they were omitted was for length concerns. After all, Illinois requires no little investment of the listener’s time as it is.

The opening trio – ‘The Avalanche’, ‘Super Computer’ and ‘Adlai’ – set a fine tone: whimsical but sonically rich, slight at times but underpinned by restrained force. Each invites the listener to return to Stevens’ earlier albums, such is their connection with both The Avalanche’s immediate predecessor and its forerunners, Michigan and Seven Swans. Indeed, it’s while looking backwards that one is immediately amazed by Stevens’ prolificacy – this is, essentially, his sixth album in as many years, and not one has lacked substance or soul, ingenuity or heart.

The inclusion here of three versions of one song, ‘Chicago’, does seem a little cheeky at first, but each is unique enough in its execution to warrant its presence. Although the acoustic take on one of Illinois’ truly imperious tracks is the most instantaneously rewarding, it’s the ‘O.C.D.’ reworking, arriving late on at 19 of 21, that earns the full three thumbs up: handclaps and buzzing electronic somethings, joyous horns and skittish percussion combine to form a whole that’s some thousand-or-so stylistic miles from much of Stevens’ introspectively historic work of late.

Many songs here seem to be twin siblings of counterparts that made the Illinois cut, and it’s that feeling of association that affords The Avalanche a greater coherency than your standard odds-and-sods effort; let us not forget, despite its excellence, that this is a collection of extras, whenever their birth. There are no strict ‘outtake’ efforts – songs that are understandably in their place here, a la extra but unnecessary footage on a DVD – but the odd dip does reveal itself with repeat plays. For example, ‘Mistress’ is sweet, but its initially ramshackle form gives it an air of incompleteness, however pretty its finale. The prog-rocking instrumental ‘Pluto’ – all appropriate twinkles and interstellar static – doesn’t entirely sit comfortably within its surroundings, either, sounding as it does like the introductory music to a Pink Floyd reunion concert.

To hardcore aficionados, these tiny gripes won’t matter one jot: The Avalanche is a great record, but one that may have benefited from its creator learning to be a little more detached from his compositions. If that were the case, some five songs could have been neatly trimmed from this album, resulting in an hour of must-hear modern-acoustic music, blessed relief from the excessive emoting of Stevens’ mainstream peers. As it is, this compilation will rarely be enjoyed from start to finish in a single sitting, as there is simply too much here for today’s attention-challenged download demographics to consume without diverting their ears elsewhere. Still, it’s unlikely that many a singer-songwriter will release an album, ‘proper’ or otherwise, of such erratic, multi-personalitied genius as this in 2006.