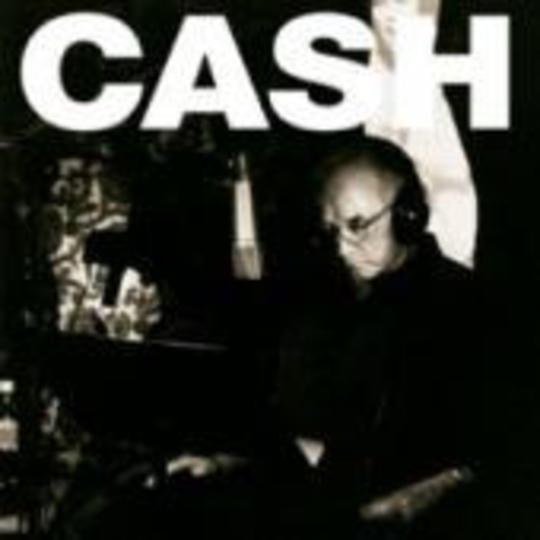 As much of a cliché as it is, it must nevertheless be stressed: there is real, tangible tragedy in Johnny Cash’s voice throughout American V; his cracked tones allow little light to shine through, but for all the feeling of his imminent departure from this plane – the knowledge that he is not to be much longer of this earth, that resonates from syllable to syllable – there is definite hope here, albeit shrouded, appropriately, in the blackest of black.

Cash’s first posthumous American series release, but probably not his last, American V again collects a number of cover versions alongside a pair of originals. Of these Cash-penned pieces, ‘Like The 309’ is a jovial, bluegrass-meets-honky-tonk number, with its protagonist prophesising, perhaps tongue-in-cheek, that “It should be some time before I see Doctor Death”. It, incidentally, was the last song Cash ever wrote. The other original here, ‘I Came To Believe’, aches like a freshly-broken heart, an organ rumbling below acoustic guitars like an echo from some over-the-hill church, a memorial service in full morose swing. Despite the song’s tenebrous atmosphere, Cash’s lyrics provide an insight into his feelings as he approached his appointment with the aforementioned practitioner: “I came to believe in a power much higher than I,” he repeats, as if he knows he’s bound for a better place.

Reunion is a common theme, too, as is love: ‘Love’s Been Good To Me’, ‘Rose Of My Heart’ and Gordon Lightfoot’s ‘If You Could Read My Mind’ are impossible to hear without the mind picturing Cash himself picturing his late wife, June, while at the microphone; the latter, in particular, is a very touching selection, Cash’s voice reduced to a rough croak but dripping with such sweet soul as to render any classically trained vocalist’s emoting forever irrelevant, forever impassionate. “Stories always end,” he says, the line’s honesty almost brutal.

American V concludes positively, with the celebration of freedom that is ‘I’m Free From The Chain Gang Now’: a re-recording of the song that featured on Cash’s The Sound Of Johnny Cash LP (but written by Saul Klein and Lou Herscher), its repeated analogies relating to liberty are absolutely translucent. This is a song of passing, specifically passing on, and its positioning is perfect.

With over thirty songs from the recording sessions that spawned American V yet to see the light of day, allegedly, it seems ridiculous to pitch this album as Cash’s parting gesture, a gift from beyond the grave that reminds us both of our own mortality and our ability as humans to love and cherish others, always. But, should producer Rick Rubin not see fit to compile another chapter – no doubt the concluding chapter – to this series, then these twelve songs will comprise a fitting eulogy to the career of a man whose legend will forever evade the assailants his body could not.