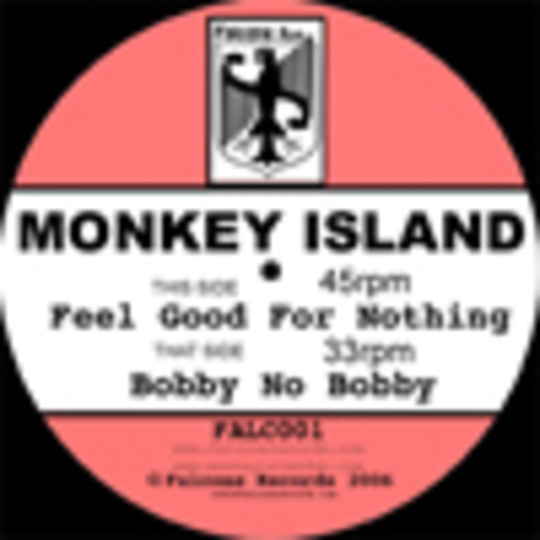 I seem to remember the* Monkey Island *of a year or so ago, at some indie-rawk show or other, regaling all with spoken-wordisms over spluttering guitars and drums full of palpitations. That band was full of energy – taut and wound, granted, but almost certain to be unleashed sooner than imminently in a flood – yet this Monkey Island, the very same by my reckoning, initially sounds like an entirely different act.

‘Feel Good For Nothing’ just jerks for its entire duration, never deviating from its path, lyrics spat with no real force, guitars teased but never taken to a place where they’d be gladly ravaged by men on a mission to move asses and stimulate synapses. It widdles and fiddles and jives and strives for something it falls way short of reaching, and thus the memory of that Monkey Island is banished, almost.

Better, though, is the b-side, something like The Blues (albeit rocked to the moon) called ‘Bobby No Bobby’. You could air guitar away whole days if the run-out groove allowed such a pursuit; as it is, you’ll have to manoeuvre that arm that works its way to the record’s middle back to its outer edge to extend your enjoyment. This is what I remember: intelligence and aggression, control and standing at the very precipice of a drop into confusion and chaos. “Everything’s gonna be alright,” that’s what they say. And they’re right: this is what you’ll be wanting to buy this seven-inch for, and your investment will be a wise one.

Because, you see, memories are rarely made of this, but that is hella fun.