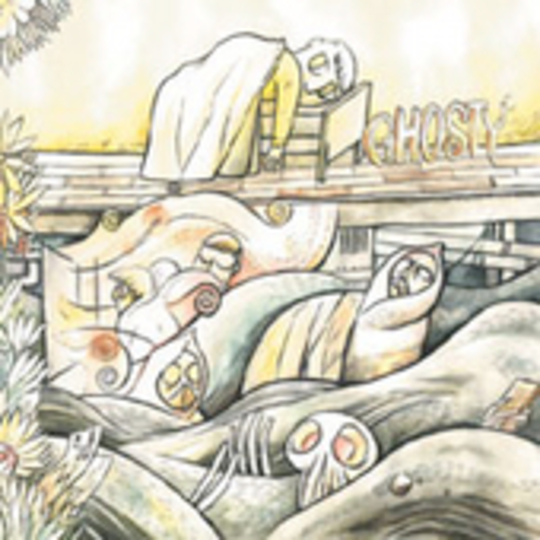 The story of Ghosty could already take up enough chapters to reach novel status in its own right. Formed in the early part of 1999 by singer/songwriter Andrew Connor and (then) drummer Richard Gintowt, they'd been jamming relentlessly and playing around the bar and college circuit of Kansas for three years before putting out an EP ('Five Short Minutes') and planning what their first long player would sound like.

Four years, several band members - Connor being the only one omnipresent throughout - and countless re-writes, re-recordings and studio sessions later, 'Grow Up Or Sleep In' is here in all its glory. And, as you'd expect from someone with the mindset of a perfectionist like Connor, his first opus - seven years since the conception of Ghosty, is pretty much faultless.

Sure, cynics may say that if you've heard one quirky, psychedelic pop band from the American underground you've heard them all, but that kind of dismissal reeks of nothing more than ignorance and a closed mind (and ear) to anything outside of the box, as it were. Add to that the fact that Wayne Coyne swears by this band - and to prove it his re-vamped and co-vocalised version of 'Clouds Solve It' features on 'Grow Up...', fitting in with rather than standing out from the melee, as so often happens when big name "guests" appear on relatively unknown artists' records.

Not that being nobodies is something Ghosty will have to contend with for much longer if 'Grow Up Or Sleep In' is anything to go by. Connor's vocal, which ranges from the sardonic rasp of a modern day J. Mascis to a more subtle variant on James Mercer's visionary approach to storytelling over meandering synths and nascent guitars. Perhaps their most obvious modern-day compadres would be The Spinto Band, while 'World Travelers' and 'Big Surrender' both represent a swooning skewered pop sensibility not heard since 'The Sophtware Slump' first emanated from many a student's dorm back in the summer of 2000.

'Grow Up Or Sleep In' is as disparate as its title suggests, whilst still delivering on every facet possible (melody, lyrical astuteness and pristine production, courtesy of Bright Eyes engineer Mike Mogis). With a bit more prolificness, who's to say Andrew Connor can't rival the likes of Conor Oberst in the not too distant future? Or maybe we should just wait for 2011, which by my reckoning should be when the next Ghosty album is due, because as they say, patience most surely is a virtue, and in this case, one that's definitely worth waiting for.