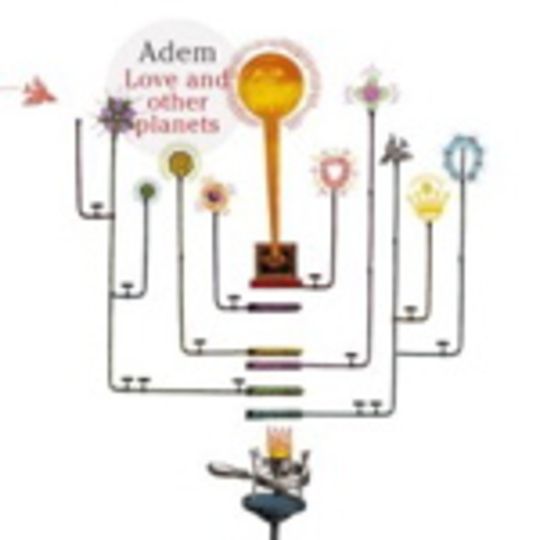 Life without pillows would be uncomfortable, hard even. They are support and comfort at our most prone, a place to rest a head heavy with questions and problems, a head heavy with modernities. My perfect pillow - it existing only in the fragments of my wishes – would contain Adem as an advisor, as an agony aunt, as an inspirator. At night, I could press my ear right into the slumberdown feathers, he’d tell me to "close your eyes and make believe / tell me what you see," he'd reassure me "the hardest thing you could've done / you've done now / it's easy from here," he'd keep whispering, murmuring, gradually becoming inaudible and prophetical as I'd drift to sleep.

Much of Love and Other Planets sounds so intimately close, it is as if my ear is snuggled into the cushioning syllables, every little crackle in Adem's voice forefront in the music. His voice is a real voice, containing the marks and scratches of real life. As with M. Ward’s vocals, there is audibly a scrunchy, ruffled quality, that of a rustling paper bag; but there is also a wilting quality, a rusting daffodil at the end of spring. There is a grave truthfulness to his singing, a stately, reserved aura, one that lends the title track incredible sincerity as he scans the night sky – "on a clear night if you look close enough / you can just make out / love and other planets / we are not alone."

Thematically, throughout, the album inflates love and all love’s facets, to a scale of universe-like proportions. In the same way, it reduces all the light-years of distance between planets to the inches between freckles on a loved one’s arm. In 'Spirals', ever so tenderly, Adem sings of tectonic shifts in his chest, feeling vaster than the Milky Way, as a partner traces the galaxy onto the inside of his arm. Lyrically, Love and Other Planets shows development from Homesongs (Adem’s debut solo album); each song has an individual take on universality; words and music are made for each other, not simply wedged one against the other. On 'X is for Kisses' each drifting, melting vocal line is sung with first words in alphabetical order, without being made to sound forced. This song, as with most of the album, employs only the smallest arsenal of instruments, yet the miniature chimes of glockenspiels, soft-touch acoustic guitar and harmonium also sound huge in their closeness when they arrive from the speaker.

Comparing Homesongs to Love and Other Planets, as is sadly unavoidable with a debut and its follow up, reveals the former to be the more immediate, the more melodic and the more understandable. However, Love and Other Planets, despite a glossier overtone, is the detailed, developing record – where Homesong’s songs ticked along in linear motion, LAOP drifts and rushes in many directions at once, or shoots downwards, or ascends rocket-like, or hovers motionless and rhythmically unleashed. 'Sea of Tranquillity' captures the complete stillness of the invisible borders between awake and asleep. 'Crashlander' plummets downwards through space as a relationship is quit, harmonically and sonically echoed.

So if, as I attempt to catch gentle slumber, I could be resting my head in this album acting as pillow, I would be transported into the most beautiful sleep. When barbershop harmonies break into softly chugging "bababas" and "lalalas", I would hop aboard the infinity bound steam-train they signify, and gently ascend through the eider down cumulous clouds, heartbeat slowing as I float gravity-free in a universe made purely from love.