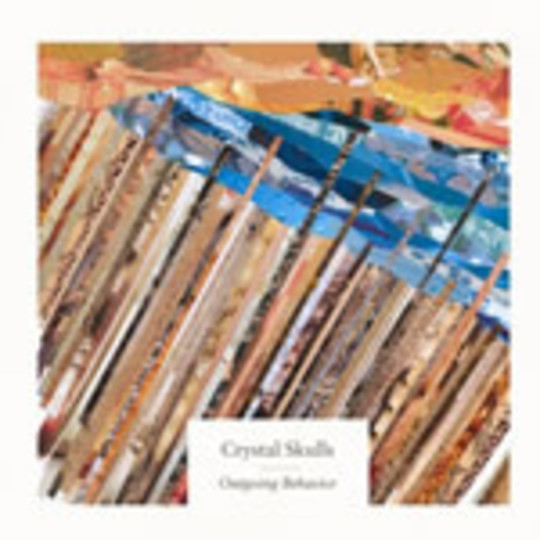 So there's this Raymond Chandler novel painted in day-glo oranges and reds instead of blacks and brown. There are vanishing femme fatales and steely faced detectives, and everyone reels off pithy asides at the right moments. Crystal Skulls authored this mystery, but something tells us their hearts aren't quite in it. Last year's Blocked Numbers was an understated gem quietly deposited into the Suicide Squeeze catalogue that the Band Math fans boiled down to Karate + Spoon + Minus The Bear. Perfectly sculpted hair. Hooks. Balls. One year later and they've made the transition from The Fonz to Richie Cunningham - _Outgoing Behaviour_ isn't a complete disappointment, just a frustrating sideways step into marginally blander, cardigan-sporting territory.

Why isn't this an entire disappointment? Christian Wargo retains his note-perfect charm, enough to forgive his occasional lyrical blunders ('Candy apple smiles'? 'You and I dim the lights and move with the music'? Eech), and Casey Foubert's drumming is still razor sharp, adept. Technically, Crystal Skulls remain as tight as they ever were: 'The Cosmic Door' is a dangerously slick strut of minimal guitar pop held down by shimmering, chandelier keyboards and samba percussion. Ryan Philips' keyboard contributions are more of a focus on Outgoing Behaviour, providing a plaintive piano to the absolute non-sequitur 'Move Me Alright' and the lithe synths that open the title track. The closing 'Sedate & Satisfied' is where Philips makes the greatest difference, providing an atmospheric calm to the song's stop-start rhythms. On the whole however, while the variety is to be applauded, it feels like the quality of songs themselves have been sacrificed.

'Move Me Alright' is one of the main offenders, a one and a half minute sketch of a song that adds nothing of interest, while the regrettable 'Brigantine Castles' is a floating, ponderous error painted with summery synths. Admittedly, _Blocked Numbers_ wasn't the most memorable of albums, but the songs had that curious power to bury under your skin and remain there. These songs however are quite content to float in the air, making no attempt to engage. Thank God, then for 'Treat It Well' - Wargo's most impassioned vocal offering, his breathless non-verbal cooing countering Yuuki Matthews athletic bass workout and the restless, angular guitars. Along with the languid but catchy 'Baby Boy', these tracks feel like the true successors to 'Blocked Numbers', but surrounded by so much mediocrity, they just make you long for the past, instead of enjoy the present. And perhaps for those new to the band, that's the best place to start.

The Sound Of Animals Fighting

Lover, The Lord Has Left Us