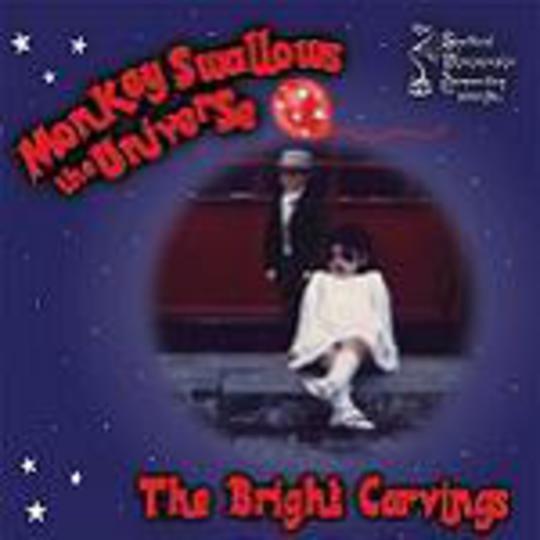 The Bright Carvings is an extremely apt name for this album, well befitting these delicately sculpted indie-pop tunes whose brightness is granted by a clear, chiming simplicity. Carving out a niche somewhere between Mazzy Star and Belle & Sebastian, Monkey Swallows the Universe’s main focus is on the powerfully sweet female vocals and the rippling clarity of the acoustic guitar. The sound is then made whole and given a quirky individuality by the addition of strings (real ones, not shitty effects), occasional brass, softly underscoring drums, other random percussion and a surprisingly apt whistling solo.

This cornucopia of instruments is used to take the basic template of invitingly simple tunes and weave them into something demanding closer attention, while always retaining the appeal of the original simplicity. Which is a damn fine trick to pull off, really. Add to this the kind of gently wry sense of humour which could come up with the line "You love me like a fashionable liberal / Loves an Eastern European dissident", tempered by a wise yet kindly eye cast over the daft minutiae of human interaction. The resultant mix of fun, beauty, melancholy and, quite simply, straightforward good tunes is an extremely appealing one.

This is a very straightforward album, hoisting its colours high and brooking no attempts at pretension and cynicism on the part of the listener. MSTU, you see, have managed to make a sound which feels like home. Not in a lazy, been-there-done-that, knowing-what-to-expect sorta way – it’s more that even the higher tempo and more deviant numbers manage, even as they demand respectful admiration, to wrap themselves around you like the atmosphere of a familiar place. They’ll make you smile even as you admire their craft, and before you’ve even heard the end of the first song, listening to this album feels like coming home.