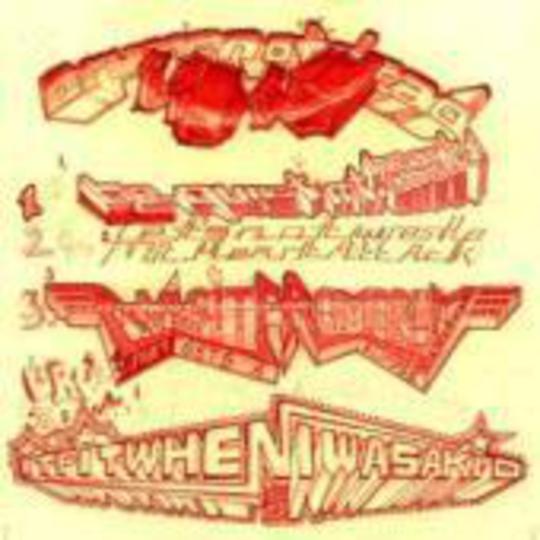 I've never had much use for Liars. Of all the bands that rattled out of New York on the hype-wagon set in motion by The Strokes, Liars always struck me as the most needlessly petulant of the bunch.

It wasn’t just that their brutal approach to the dance-punk they trafficked in did nothing for me; it was the fact that, at times, their music seemed to be a direct flip-off to their fan-base. Starting with the nigh-on unlistenable 20 minutes of feedback and static that rounded off their debut, the irritation continued on They Were Wrong, So We Drowned, an album that while having its fair share of fans (apologists), for me falls into the same tantrum-throwing/artistic experiment category as Lou Reed's Metal Machine Music.

Drum's Not Dead arrived with an abominable amount of pretentiousness tacked to it. Believe me, it is the last disc I expected to be whole-heartedly endorsing this year. Overall, Drum's Not Dead feels like a primordial soup of musical styles, throwing in primal drumming, organ tinkling, sound effects and guitar scree and feedback. What's incredible is that the overall musical blueprint sounds less like a departure from the band’s earlier work, and more like they managed to break their sound into its component parts, while at the same time taking a giant leap forward.

The album begins with 'Be Quiet Mt Heart Attack', which rides in on a jangly, thrumming guitar line, backed by lazy drumbeats and slowly building up a seething thunderhead of tension. Then, layered howls sound over cymbal taps and you’re plunged headlong into the buzzing, whirling, didgeridoo-esque tribal drum freakout of 'Let’s Not Wrestle Mt Heart Attack'. This track is the axe that severs any doubts about the band’s intentions - Drum's Not Dead is a sensory journey. Angus Andrew’s numbly detached-sounding falsetto only ratchets up the urgent sense of paranoia contained in these songs.

This is music that aims beyond the usual information centres and hits you somewhere in the pit of your stomach, calling out a raw emotive reaction. The call and response lyrics of 'Drum Gets A Glimpse' (the album’s first gorgeous respite) are the sugar coating on the fragile guitar effects, and cathartic cymbal flourishes washing over the listener. Elsewhere, 'It's All Blooming Now Mt Heart Attack' lowers you into a swamp of humming feedback, filled out with creaking guitar and muted horns, before the vicious psychopathic marching drums and searing hooks of 'Drum And The Uncomfortable Can' puncture your cocoon and drag you screaming to a murder plot.

This music is made all the more impressive given Drum's Not Dead's depth of intention. The album's overriding theme is centred around the eternal conflict of ying and yang, confidence and insecurity, light and dark and creativity and doubt which are named Drum and Mt Heart Attack respectively here. But while it's bursting at the seams with ideas, the disc's true strength lies in the fact that you can take all the surrounding themes and cerebral baggage as seriously or not as you like, because it doesn't matter; what's inarguable is the quality of the music coming out of the speakers.

With their third album, Liars have succeeded in creating the near-impossible; a conceptual work that speaks to the emotions and the intellect simultaneously. What's more, they've managed it on their own terms, and the end result is an album that crosses into the 'essential' category effortlessly. This is high praise and it's grudgingly given. I’m sure Liars wouldn't prefer it any other way.