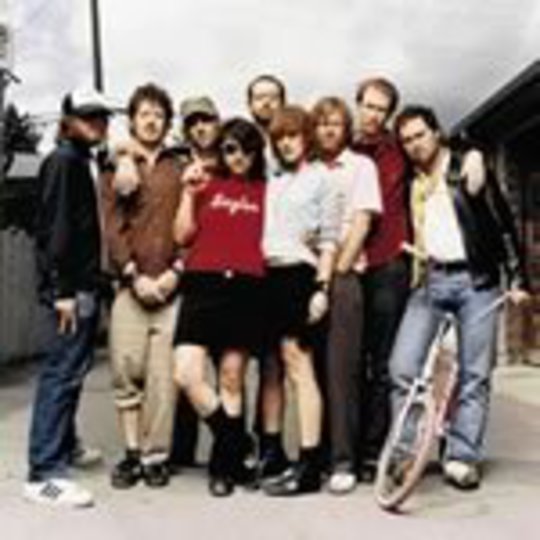 Broken Social Scene’s eponymous third album, released here at the turn of the year, was packed full to the brim with stuff. Like watching Waking Life, you’re constantly being distracted by something new; try to focus on the singing or the bassline, and suddenly you’re overcome with something close to indie ADD, your attention whipped away by something you hadn’t previously noticed - warped singing in the background, or a sudden injection of brass; thinking, “Cool! Rapping!” It was all very... busy; at its best the various sounds stop competing and merge in a kind of polyphonic agreement, at other times just seeming cluttered and disparate.

7/4 shoreline is an example of the production working, and working well. Its opening chords remind me of sports day at my first school; all the kids, lined up side by side, eager to be set upon the track, nervous under the razor-sharp sun. Then the starting gun fires; that is to say, the drums kick in, and suddenly it’s a haze of lush, dreamy vocals (supplied, in part, by Leslie Feist) and to-the-point, make-your-feet-shuffle drums, jostling for position alongside restless guitars that build, soar, and eventually pause for breath before the last stretch. And when it begins again it’s more focused and sure of itself, the chant “It’s comin’, it’s comin’ in hard” pushing us on to the finish; something that comes adorned with regal trumpets and a grand sense of accomplishment, an exercise in being happy in the moment.